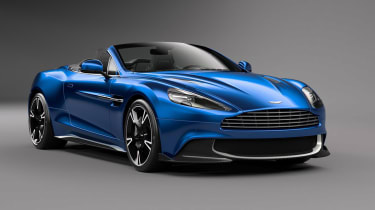 Aston Martin has released the first pictures of the new Vanquish S in convertible form, taking on the Vanquish S Volante nameplate.

While the convertible version of Aston’s flagship grand tourer was confirmed alongside the reveal of the coupe in November, this is our first look at the more powerful, muscular looking Vanquish without its hard top roof. Instead, it gets a retractable soft top.

Under the bonnet the Vanquish S Volante gets an uprated version of Aston’s 6.0-litre naturally aspirated V12, producing 595bhp. It also gets a revised intake system, which Aston says creates stronger power delivery further up the rev range. 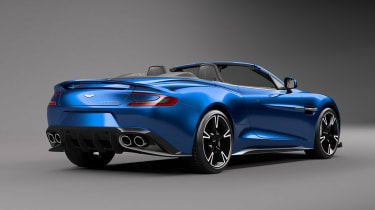 The 8-speed Touchtronic transmission has been tweaked, with faster shift times promised. Likewise, the suspension setup gets alterations with re-tuned spring rates and damper internals intended to sharpen things up when the car is in sportier driving modes.

Along with the convertible roof, the Vanquish S Volante gets the same aggressive design tweaks found on its fixed-roof sibling. Exposed carbon fibre styling details dotted around the car’s exterior and the material is used to fashion the new front splitter and rear diffuser. New quad-exhaust outlets poke out from the rear bumper. 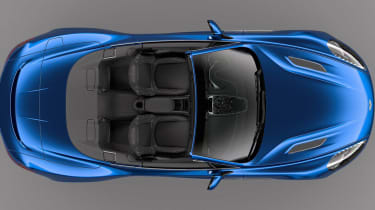 More styling options will be available such as carbon fibre bonnet louvres, new 5-spoke alloy wheels and even graphics packs, while further styling tweaks are available in the cabin with satin chopped carbon-fibre trim for the fascia and new Filograph quilted leather upholstery.

Performance figures for the Volante are to be confirmed but it shouldn’t be too far off the pace of the coupe, which cracks 0-62mph in a claimed 3.5 seconds and has a top speed of 201mph. Expect it to be priced a little higher than the £199,950 of the hard top Vanquish S.

What do you think of the new Aston Martin Vanquish S Volante? Let us know in the comments. 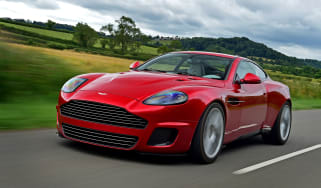 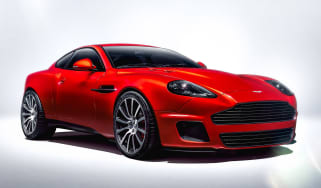