The British supercar maker has been let off the Ford leash, and the N400 shows they mean business... 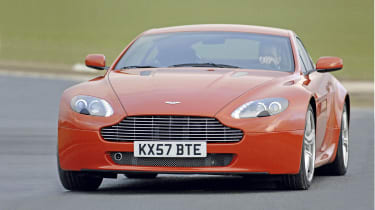 The N400 is a great example of Aston at its best. Now that Ford is out of the picture, engineers have been allowed free rein, and the result is the sports car the Vantage always should have been. It’s just a shame most N400s will be sold by the time you read this. However, the firm is expected to make the 400bhp engine available as standard on the ‘regular’ V8 Vantage in the next 12 months, while the suspension package will be an option.

It’s all change at Aston Martin – Britain’s most famous supercar maker is being let off the leash. Following its sale by Ford, the firm is making the most of its independence, and there is now evidence of that in its cars.

But while models such as the 6.0-litre V12 Vantage RS may be some way off, its latest offering is already here – the N400. Essentially a limited edition V8 Vantage, it gets a 400bhp 4.3-litre engine, uprated suspension, some visual tweaks and a host of extra equipment, too.

Available in Coupé or Roadster trim, only 240 examples of each body style will be made, priced from £94,000 and £102,000 respectively. They are being built to celebrate Aston Martin’s participation in several editions of the gruelling Nür­burg­ring 24 Hour races, in which the company used a near standard production V8 Vantage called the N24. What’s more, the N400 has spent thousands of miles being fine-tuned at the famous German track.

That presence has certainly paid a dividend in raw pace – Aston now claims the N400 is among only a handful of production cars that can lap the circuit in less than eight minutes. But carrying a price tag £11,200 higher than the standard Vantage’s, is the N400 really worth the extra?

Well, it certainly stands out. As well as Bergwerk Black and Lightning Silver, the N400 is also available in the Karussell Orange seen here, which is named after one of the Nürburgring’s corners. The model also gets restyled sills, silver air intakes and a new grille. Lightweight 19-inch alloys and clear rear lamp lenses complete the visual updates.

With the exception of the aftermarket look of the tail-lights and the bright paint, the N400’s make­over is actually rather subtle. And it’s a similar story inside. There’s lots of black leather trim, available with several stitching options, a little more aluminium and a rather tacky looking Nür­burgring circuit map on the armrest.

However, with neat numbered plaques on the sills, and lots of desirable standard equipment, such as sat-nav, Bluetooth, cruise control, a 700W stereo and heated memory seats, it’s a great place to spend time.

Tweaks to the engine management and an air intake system taken from the flagship DBS liberate an extra 20bhp from the 4.3-litre V8, taking power to 400bhp, while torque rises from 10Nm to 420Nm. The standard transmission is a six-speed manual, while the Sportshift semi-auto fitted to our car is available for another £3,000.

The suspension has springs that are 40 per cent stiffer up front and 30 per cent firmer at the rear, while there’s also the addition of a beefier rear anti-roll bar and uprated dampers, too.

As a result, you’d expect the N400 to be rather uncomfortable, but the ride is better than the standard Van­tage’s, as it feels more controlled and compliant. The new wheels can take some credit, as they reduce un­sprung mass dramatically. Increase the pace, and there’s increased feedback from the steering, while the N400 is more responsive, with far less body roll.

The Sportshift gearbox adds to the fun, and the engine is simply glorious. Although the extra power doesn’t make a great difference on paper – the 0-60mph sprint is identical at 4.9 seconds and top speed is up only 2mph to 177mph – the V8 feels more muscular at high revs. Above 4,500rpm it pulls harder and where you might have changed up at 6,000rpm before, you hang on until the red line. As a result, you’re treated to storming acceleration. Those airboxes also mean the V8 sounds menacing throughout the rev range.

So does the N400 make sense? Absolutely. Most Vantage buyers add £10,000 worth of options anyway, so this car is great value when you consider it’s not only well equipped but better to drive than the standard model, too!

Rival: Porsche 911 GT3 While the N400 is a focused grand tourer, the 911-based GT3 is an even more extreme machine. It’s most at home on the race track, and is for those who demand a razor-sharp driving experience.