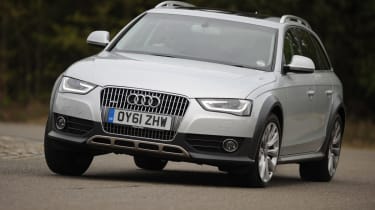 Ever since the high-riding A6 allroad made its debut in 1999, Audi has set the standard in the rugged premium estate sector. A decade later, it was joined by the popular A4 allroad model.

However, Audi isn’t resting on its laurels, as the A4 allroad has recently been facelifted alongside the rest of the A4 range.On the styling front, there’s a sharp new set of optional LED lights at the front, plus new 18-inch alloys. Yet the changes are hard to spot, as the allroad does without the flatter foglights and restyled bumpers fitted to the rest of the refreshed line-up.

The minimalist design is familiar, but the Audi still has understated class that the Peugeot struggles to match. The A4 is much shorter and narrower than RXH, though, and its suspension has only been raised 37mm, so it looks less imposing, too.

Inside, the updates are even more subtle, but the new multifunction steering wheel, gloss trim inserts and simplified MMI infotainment system are welcome changes.After you’ve experienced the Peugeot’s well appointed cabin, the Audi feels a little bare inside.

More reviews for A4 Allroad

All the basics are covered, but you have to stump up extra for luxuries like electric seats (£765), a panoramic sunroof (£1,125) and even DAB radio (£305). This comes as a shock after the RXH’s generous spec, but there’s no denying that the allroad feels more expensive.

The dash surfaces are all finished in high-quality materials and are well engineered, while the Audi has a generally robust feel that’s important in cars designed with some off-roading in mind.

The A4 also edges in front when it comes to practicality – a key factor for any estate buyer. Its boot is 20mm longer than the Peugeot’s and comes with a storage pack that includes dividing rails and a reversible mat to help protect the interior.

Both cars offer a similar amount of room for rear-seat passengers, but the lack of light in the back of the allroad makes it feel more cramped than the 508 – as does the large transmission tunnel in the footwell.

On the move, the conventional drivetrain holds fewer surprises than the Peugeot’s, but the combination of a hushed, smooth 2.0-litre diesel and accurate manual box makes it relaxing to drive – helped by a more comfortable ride than the firm RXH. The performance gap widens through tighter turns, as the Audi feels more planted thanks to its weighty steering and excellent brakes.

While the allroad was unlikely to match the HYbrid4 at the pumps, the difference between the two was not as big as we were expecting and a glance at our data shows the A4 will save you more than £6,000 in depreciation over three years – that’ll be hard to ignore in the final reckoning.

Chart position: 1Why: The A4 allroad has defined this class until now, and the revised model builds on the company’s traditional strengths of superb build quality and refinement.