Peugeot 508 RXH vs Audi A4 allroad

High-riding premium 4WD estates have long been Audi’s forte, so can the new hybrid Peugeot upset the established order? 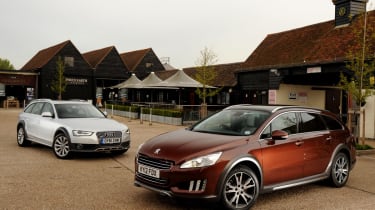 Hot on the heels of its first-ever diesel hybrid, Peugeot has now released a second model powered by its innovative new HYbrid4 drivetrain.

The 3008 HYbrid4 failed to make an impact on its debut back in Issue 1,203, so can the 508 RXH restore company honour? It’s the new flagship of the 508 range, so it comes with a suitably premium price tag.

Yet with a combined power output of 200bhp, the rugged ability of its four-wheel-drive powertrain, plenty of luxury kit and remarkably low CO2 emissions of 107g/km, it has what it takes to mix it with upmarket rivals such as the Audi A4 allroad.

The facelifted Audi boasts top-notch quality, rugged looks and a desirable badge. So which of our contenders will take top honours in this rough and tumble, high-riding estate encounter?

These rugged estate cars are a rare breed. But with their understated images and light off-road abilities. they’re tempting alternatives to the increasing number of brash compact SUVs on the roads.

Our rivals look similar on the outside, and although mechanical differences underneath make them different to drive, the result was still close.

The Peugeot 508 RXH deserves recognition for bringing something different to a very conservative market, and it comes extremely close to causing an upset in this test. However, it doesn’t do quite enough to topple the Audi A4 allroad here.

Superior driving dynamics and unquestionable build quality make up for the Audi’s meagre standard kit, while the premium image means it’s still the more desirable choice even after the mildest facelift. Strong residuals and a lower price ensure the Audi is better value, too, but company buyers should look at their tax returns before dismissing the Peugeot.

The 508 RXH is one of the company’s most intriguing recent models, but it is not without its flaws. The hybrid powertrain works well in the city, but the semi-auto box and two-tonne weight hamper progress on the open road. We also have our reservations about the Peugeot’s build quality. Crippling depreciation doesn’t help, either.

The refreshed Audi doesn’t take risks with styling or interior design, and this lack of innovation almost sees it knocked it off top spot. Yet its reassuring build quality and excellent dynamics prove to be enough – and it retains its crown. The allroad has a softer ride and better refinement on the motorway than the Peugeot. It’s sharper to drive, too, but like the RXH, it’s hard to justify over the standard model.

The 508 RXH is the most convincing HYbrid4 model we’ve tested yet, and if it came with a more modern automatic gearbox, it could have won this test. Sadly, the on-board batteries demand a lot of compromises without delivering the promised fuel economy. They also rarely get used where the RXH is at its best – on long motorway journeys. That means the standard 508 SW is still the better choice for most buyers.