Do clever hybrid drive and luxury kit give newcomer the edge? 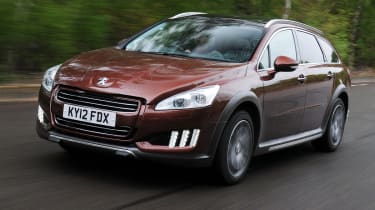 Peugeot has abandoned its attack on the Le Mans 24 Hours, but that doesn’t mean the company’s fierce rivalry with Audi is over. Its new 508 RXH is aimed directly at the recently revised A4 allroad, and the battle between these production models looks set to be just as competitive as the fight between their racing counterparts was.

If imitation is the sincerest form of flattery, Peugeot has paid Audi a huge compliment with the looks of the RXH. Our test model featured Copper metallic paintwork and optional £715 LED lights that are meant to look like a set of lion’s claws – yet the two cars have remarkably similar profiles.

The 508’s nose sits higher than the A4’s, giving it a taller overall stance, but the front of the RXH is a little fussy, with too many design flourishes vying for your attention at the same time. Still, the pretty 18-inch wheels and smart chrome trim with some subtle HYbrid4 badging do an excellent job of matching the elegant Audi’s style.

The RXH also has some mechanical changes: it rides 50mm higher and has a 40mm wider track than the standard 508 SW estate, making it more capable off-road.

Yet despite this tough image, it’s anything but utilitarian inside. A full-length panoramic sunroof gives a spectacular view out, while the gorgeously detailed light fittings and hi-tech head-up display provide the cabin with a very smart, modern feel. However, close scrutiny of the Peugeot’s fit and finish leaves you with lingering doubts about build quality.

Our test model already had creaking panels and major controls like the central gear selector and gearshift paddles feel cheap and brittle to the touch. The Audi definitely looks and feels more solid inside.

But the RXH holds the upper hand for interior space. Because its rear wheels are driven by electric motors, not a conventional driveshaft, the rear passenger footwell isn’t impeded by a transmission tunnel. This means three adults can easily fit in the back.

The battery pack encroaches on luggage space – the Peugeot’s boot is 67 litres smaller than the Audi’s, at 423 litres – but the wide tailgate and handles for flipping down the back seats mean it’s still a reasonably practical estate.

The diesel-electric powertrain has also transformed the way the 508 drives. There are four different modes to choose from via the circular selector on the dash. Each one makes use of a different aspect of the car’s technology.

The 4WD and Sport modes both free up the maximum 200bhp combined output of the 2.0-litre HDi engine plus electric motor. In these modes, the Peugeot matched the Audi in our in-gear tests, but it still trailed by a second from 0-60mph, with a time of 9.7 seconds.

This lack of urgency is partly down to the fact that the RXH weighs a hefty 280kg more than the A4, but the semi-automatic gearbox must also shoulder some of the blame. Even when using the paddles to change gear manually, it feels clunky and slow to react.

This is less of a problem on the motorway, as the Peugeot is a talented cruiser thanks to its large fuel tank and hushed cabin. But as soon as you start to demand more from the chassis, the body leans heavily into corners and the gearbox quickly becomes flustered.

As a result, the standard diesel 508 SW is a more engaging car to drive. However, the benefits of the hybrid are clear around town: the RXH can travel at up to 2.5 miles purely on electric power. This also means that the Peugeot is cleaner than the Audi – plus it was 6.4mpg more economical in our hands, returning 40.6mpg. But this gap is smaller than the official figures suggest and you’ll struggle to get near to Peugeot’s claimed figure of 68.9mpg in everyday driving.

Much lower CO2 emissions than the A4 make the 508 the cheaper company car choice in this test – but less impressive residual values and a higher list price could ultimately hold it back.

Chart position: 2Why: The RXH has same technology as 3008 HYbrid4, but in a much more desirable package. It costs more than the Audi yet is loaded with kit and is cheaper to run.

Go Back to1st Audi A4 allroad
Continue ReadingFacts and figures