All-new Audi A4 promises to be better than ever, but can it beat the Jag XE and BMW 3 Series?

Competition in the compact executive class is reaching fever pitch. Hot on the heels of the new Jaguar XE and facelifted BMW 3 Series comes the all-new Audi A4.

Based on the brand’s adaptable MLB architecture that has already been seen on the Q7 SUV, the newcomer promises to be lighter, faster, sharper to drive and more efficient than before. Plus, with Audi’s reputation for delivering hugely desirable interiors, the A4 claims to set new standards for quality and desirability. 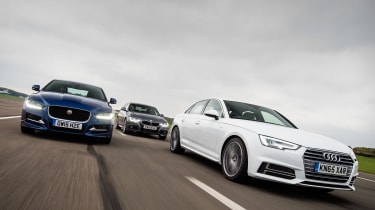 As before, the A4 is available as a four-door saloon, while an Avant estate joins the range later this year. There are SE, Sport and S line trims, and we test the latter with a 187bhp 2.0-litre TDI engine and seven-speed twin-clutch box. The Audi’s first test is far from an easy one, though, as it has to take on the Jaguar XE, which scooped compact executive honours in our 2015 New Car Awards thanks to its sleek lines, cosseting interior, engaging driving dynamics and low running costs.

Completing our line-up is the refreshed 3 Series. It lost out to the Jag in a recent encounter, but with its blend of sharp handling and top quality, the 320d is a tough opponent for any new arrival.

More reviews for A4

Read our in-depth reviews above, then read on for our verdict...

Our three contenders are closely matched on interior space, but surprisingly it’s the Audi that has fractionally less rear legroom - our figures show it trails its rivals here by 30mm. Still, the A4 hits back with its well shaped 480-litre boot, which matches the 3 Series’ and is a useful 25 litres ahead of the Jag’s. All three cars feature a split/fold rear bench.

LED running lights feature on all the cars here, but only the Audi gets LED technology as standard for the headlamps, too. The Jaguar is fitted with bi-xenons, while the BMW makes do with traditional halogen units – although our test car had the £710 optional LED set-up. 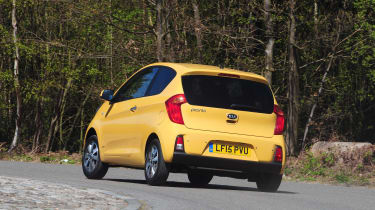 Audi’s Torsen-controlled quattro all-wheel drive is available on the 2.0-litre TFSI petrol and 2.0 and 3.0 TDI diesels, while the BMW’s xDrive system is optional on the 320i, 320d, 330d and 335d. In the UK, Jag only offers AWD on the F-Type and imminent F-Pace SUV. 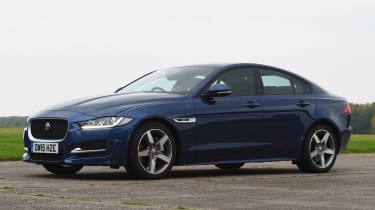 It’s another road test victory for the Jaguar – albeit by a small margin once again. The XE’s blend of head-turning style, a classy cabin and a refined, responsive driving experience tugs at the heart strings, while low running costs, a long kit list and trouble-free ownership experience appeal to the head. The only drawbacks are the cramped boot and fussy infotainment system. 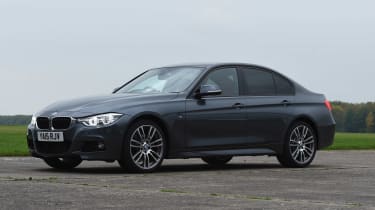 The BMW comes close to regaining the compact executive crown again. It’s great to drive, delivers strong pace and is beautifully finished, plus surprisingly practical. The 3 Series isn’t quite as cost effective to run as the Jag, but it’s not far behind and is more efficient. M Sport trim comes well equipped, but business users would be better off with the frugal 320d EfficientDynamics. 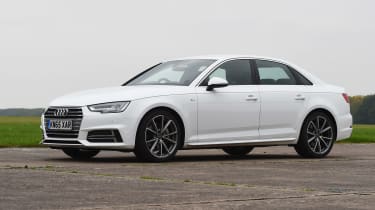 Make no mistake: the A4 is a hugely desirable saloon. It’s impeccably finished, impressively refined and has one of the best interiors at any price. The 2.0 TDI is also smooth and responsive, while S line versions have lots of kit. Yet the uninspiring driving dynamics, firm ride and highest-on-test running costs let the A4 down. It’s also hobbled by gear ratios that are unsuited to UK roads. 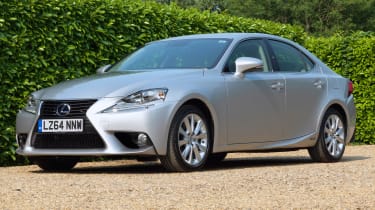 The petrol/electric IS makes an interesting alternative to the usual European suspects. It’s not as fun to drive as the BMW, but its smooth powertrain is cleaner than a diesel. The car is also well equipped, beautifully built and hassle-free to own. 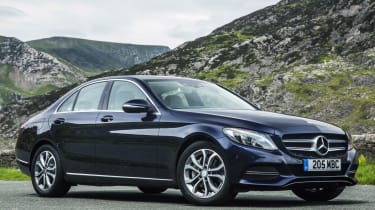 Sleek looks, a stunning interior and a solid gold image make the C-Class a desirable addition to any corporate car park. It also emits a mere 109g/km of CO2. Yet the clattery diesel undermines the package.