We get behind the wheel of a cool new four-seater Audi A5 Coupe 2.0 TDI Sport on British roads 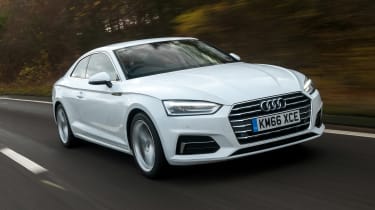 There’s nothing wrong with playing it safe when you’ve already got a successful formula, and that’s what has happened with the new Audi A5 Coupe. It looks smart, is efficient and has a well finished interior with a big boot. It’s not the most fun car to drive, but it’s composed and the engine feels more than powerful enough while still offering excellent economy and refinement. The A5 is let down by a stiff ride, some road noise and the tight rear seats, but it’s still a good alternative to the more sensible A4 saloon if you don’t carry passengers in the back very often.

Audi’s new A5 Coupe has finally made it to the UK. The BMW 4 Series Coupe rival is now based on the current A4 saloon, rather than the previous version, so can it match the BMW – as well as the Mercedes C-Class Coupe – here in Britain? We’ve got behind the wheel of the new model in Sport trim with the 187bhp 2.0-litre TDI ultra diesel to find out.

The A5 Coupe doesn’t look massively different from its predecessor, with a similar roofline and muscular stance on the road. That’s not such a bad thing, because the car still looks smart, and it’s easily a match for its main rivals in the style department. 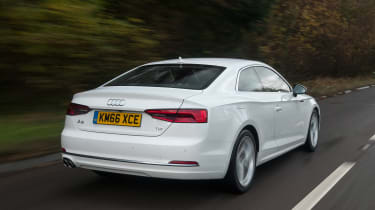 There’s a bigger difference inside, because the new A5’s interior has taken a step forward. Material quality is excellent, and the simple, clean dashboard design is one of the best of any car at this price. It’s a different approach to the curves of the C-Class Coupe, but it works just as well to create an upmarket feeling.

In addition, the seats are comfortable and supportive, and the wraparound dash and lower driving position mean it feels a bit sportier than the A4 saloon. Audi’s MMI user interface for the seven-inch infotainment system is easy to use and responsive, too, while the cabin build quality feels top-notch.

Even on models without the full Virtual Cockpit display there’s a screen that displays driving data and sat-nav maps in between the dials, and standard kit includes LED ambient lighting. All of this means that the interior is one of this latest two-door’s best features. 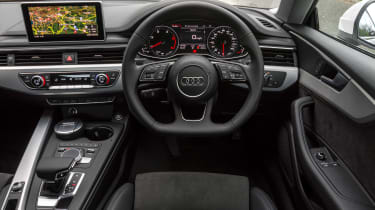 Just like the A4, the new A5 Coupe is 60kg lighter than its predecessor. That means it’s even more economical than before; Audi claims the 2.0 TDI ultra version returns a very respectable 70.6mpg, which beats the previous car’s 67.3mpg figure.

And with 187bhp on offer, the four-cylinder diesel engine isn’t just efficient – it’s powerful, too. It delivers 400Nm of torque, which will be more than enough to make motorway drives easy. And it works well with the seven-speed dual-clutch S tronic automatic transmission, which shifts smoothly and quickly.

It means the Audi feels composed at speed – and the handling is equally grown-up. While the Audi isn’t as much fun in corners as the rear-wheel-drive 4 Series Coupe, there’s not much body roll and the car feels settled on the road. That does come at a cost, because the ride is a little harsh on the sort of pock-marked roads we often have to endure in the UK. It gets better at speed, though, meaning motorway trips shouldn’t be a problem.

When cruising there’s quite a bit of roar from the tyres, but wind and engine noise are well suppressed. We suspect that if it ever does become a problem, the right set of tyres would do the trick. Since the ultra doesn’t come with Audi’s quattro four-wheel drive, the A5 didn’t feel particularly grippy on our wet test. A quattro version is available, but while it offers plenty of traction, fuel economy is compromised by the heavier AWD system.

As the A5 is the A4’s sportier sibling, there’s understandably less space inside. The front seats have plenty of room, and there’s enough headroom even for taller drivers to get comfortable, but visibility could be better thanks to thick A-pillars and a high shoulder line.

In the back, legroom isn’t great and adults won’t be able to spend much time there before they feel very cramped. It might be acceptable for kids, but as they grow they’ll encounter the same problems, while headroom will become an issue, too, because the sloping roofline means there’s not much vertical space back there, either. Still, there’s always the A4 if you really do need room in the rear.