A good SUV without the brash overtones - but go for the 3.0 TDI over the 3.2-litre FSI 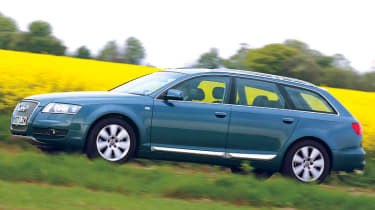 The Allroad still offers up a good combination of practicality, refinement and subtle style, while the air-suspension provides versatility and a fine ride. If you need an SUV without brash overtones, then it fits the bill perfectly. But we'd recommend that you steer clear of the disappointing 3.2-litre FSI unit and instead opt for the 3.0 TDI. Not only is it cheaper, but its laid-back, muscular power delivery better suits the car.

Rugged off-road ability, car-like responses on the tarmac... Audi's Allroad should be a winner. Even so, a limited range and high prices have meant the latest version of the executive crossover has hardly been a runaway sales success.

In an effort to broaden its appeal, the firm has now added two fresh FSI petrol engines to the two existing diesels - a monstrous 345bhp 4.2-litre V8 and a smaller 254bhp 3.2-litre V6. It's the latter that is expected to be the big seller, so we got behind the wheel to see whether we think it can revive the soft-roader's fortunes.

Visually, the new petrol model is identical to the oil-burners. It has the same flared plastic wheelarches, sill extensions and a stainless steel underbody skid plate. Overall, the look is of smart urban understatement, rather than rugged mud-plugging intent. And if you specify that the chunky additions match the body colour, you may have real trouble telling the 4x4 apart from a standard A6 Avant.

It is the same story when you climb inside the spacious cabin. Apart from kickplates bearing the Allroad badge, you could be sitting in any A6. Fortunately, that means an excellent driving position, well laid-out controls and impeccable build quality. Refinement is also impressive, with wind and road noise kept to a minimum, even at speed.

Twist the key in the ignition, and it's clear that the 3.2-litre motor is a more subdued power source than the diesel unit. Despite its impressive output, the combination of a heavy body, six-speed Tiptronic auto and quattro four-wheel drive means progress feels sedate rather than scintillating.

Audi claims the 0-62mph sprint takes 7.7 seconds, while top speed is 149mph. But in reality, acceleration seems a little sluggish, particularly from rest. To give its best, the V6 needs to be revved hard, and only really comes on song once the rev counter passes 4,000rpm. Economy isn't a strong point, either, and the car struggles to return more than 25.7mpg. On the plus side, the V6 does retain its trademark smoothness and sporty growl when pressing on.

Fortunately, the chassis is still able to shine. With selectable air-suspension, the Allroad can be raised by 60mm for taking on the rough stuff, or dropped low for sharper on-road responses. Simply dial in one of the five settings with the console-mounted MMI controller and the computers do the rest.

The beefed-up all-wheel-drive system plays its part, too, helping the Audi cope well with slippery surfaces. And although the Allroad lacks the low-range gearbox of the old model, the stability control has been tuned for off-road use. Back on smooth tarmac, and you'll find that the suspension does a better job of ironing out the bumps than the normal A6's, while the handling remains sure-footed. Enthusiastic drivers may find the steering over-assisted and a little numb, but they will appreciate the reduced body roll when the 'dynamic' suspension mode is selected.

The Allroad scores strongly if you require SUV versatility yet don't want to compromise on-road handling. Yet sadly, the 3.2 V6 doesn't add anything to an otherwise strong package. Choose one of the diesels and you'll spend less, get better economy and improved real-world performance.