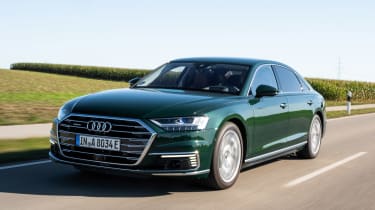 The Audi A8 60 TFSIe quattro is probably the most convincing model in the limo’s line-up – particularly when you consider that cars like these tend to spend most of their time waiting, crawling around city centres or queuing at airports. For someone with access to charging, this A8 would be the perfect tool as a comfortable, nicely finished, supremely refined and surprisingly cost-effective limo.

We’re entering an era where limousines have to feature some form of electrification to be competitive on both cost and ethics. But while the BMW 7 Series and Mercedes S-Class have been doing battle in plug-in form for some time, the latest version of the Audi A8 has had to make do without a full hybrid option. Until now, as the A8 60 TFSIe quattro has just joined the range.

The new offering mixes a 3.0-litre turbocharged V6 petrol engine (no diesels here, thank you) with a 94kW (126bhp) electric motor for a total system output of 443bhp. There’s an eight-speed automatic gearbox and quattro four-wheel drive, too.

Audi hasn’t named any performance figures just yet but we’d expect 0-62mph to take around six seconds, and the top speed to be somewhere north of 140mph. You’ll be able to choose the TFSIe powertrain in standard and long-wheelbase Sport versions, and as a range-topping Vorsprung in long-wheelbase guise only. 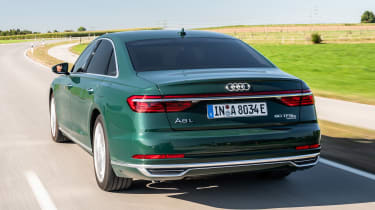 Perhaps more important is the fact that the car’s 14.1kWh battery takes two and a half hours to charge via a 7kW wallbox, and that with it fully repleted, it can travel at least 40km (26 miles) on electric power alone. And, Audi claims, at speeds of up to 111mph. Those numbers should put the 60 TFSIe Quattro on par with the Mercedes S 560 e and BMW 745 Le xDrive - and the Audi is, in theory, capable of going quicker on electric power alone than either of its rivals.

It works well in practice, too. The eight-speed auto is a smooth performer and it helps the hybrid system glide between electric power, and a combination of the e-motor and the combustion engine. It’s possible in most regular traffic situations, though, to use the instrument panel indicator to keep the throttle input in check and maintain progress on electricity alone.

Should you want to, you can force the A8 to stay in this setting by flicking an ‘EV’ button on the lower of its two touchscreens. But for most, the simplest approach will be to leave the car in Hybrid mode and allow it to make its own decisions on when petrol is required. In this configuration the car draws data from a range of sources – navigation, any specific route you’ve requested, live traffic info, topography – and uses it to manage when the engine is needed and when it can recuperate energy that would otherwise be lost through braking. 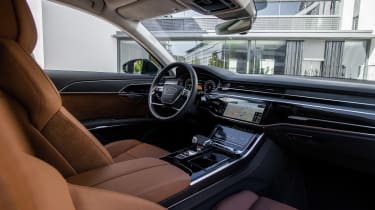 It’ll even give your right foot a little nudge through the throttle pedal if, say, you’re approaching a T-junction and it spots an opportunity for you to lift off early and trickle a little extra juice back into the battery. Incidentally, if you want to ensure that there’s enough charge left in your cells for pure-electric running at the end of your journey, another mode will maintain the level – at the price of higher petrol consumption, of course.

Either way, that 14.1kWh unit certainly looks capable of matching that claimed figure based on our test route, which took in a mixture of motorway, A-road, empty country routes and urban streets.

And all the while, the thing that is likely to impress you most is the refinement. The A8 could hardly be described as uncouth at the best of times, but the electric motor noise is nicely suppressed – and even when the engine is running, it’s uncannily smooth.

The chassis isn’t quite a match for this supreme powertrain. Body control is generally kept in check, but the trade-off for that is that the Audi joins the BMW 745Le in being a smidgen shy of the suppleness of the S-Class. That’s a pity, given the A8’s mission statement. 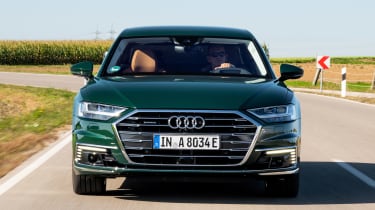 We’ve fewer complaints about the cabin itself; it’s a lovely space to spend time, either up front or in the back, with a wide range of sumptuous finishes and bags of technology to play with.

The jury’s still out on one of the centrepieces of this, though. Audi’s twin-display infotainment system looks fabulous but it uses haptic feedback, meaning you have to properly press and hold the on-screen buttons to make anything happen. It’s hard to see this as anything other than tech for tech’s sake, because it only serves to divert your gaze away from the road for longer. A simple touchscreen – or true, physical buttons – would be easier and faster to operate.

All that remains, then, is for Audi to publish the official WLTP efficiency figures for the A8 L 60 TFSIe Quattro. We’d expect them to be competitive with rivals, ensuring that on the likes of Benefit-in-Kind tax and real-world running costs, this could quickly become the pick of the A8 range.