We drive the Mercedes S-Class rival on UK roads for the first time. Can the latest model compete on comfort? 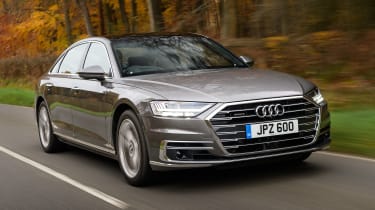 The A8 feels closer than it’s ever been to beating the Mercedes S-Class - and yet, if push came to shove, we’d still opt for the Stuttgart flagship over Ingolstadt’s latest offering. That’s because for all of its tech, refinement and undoubted dynamic ability, the A8 isn’t quite so well tuned for lumpy British road surfaces. Buy one and you’ll be getting a very capable, beautifully made and sumptuously finished limo. But the person sitting in the back of an S-Class will still be that teeny bit more comfortable than you.

The goal for the fourth generation of the Audi A8 is fundamentally the same as the task that faced its three predecessors: beat the Mercedes S-Class. Because while the likes of the BMW 7 Series and Lexus LS are hovering around, and Jaguar’s XJ is easily dealt with, what Audi bosses really want is to land a hammer blow on the car that has defined the luxury limousine sector for the past few decades.

Audi hasn’t cut many corners in its latest effort. The A8 gets an all-new structure that makes even more use of aluminium than before - although the engineers have then packed so much other new equipment and technology on board that, somehow, the car ends up being just under 100kg heavier than the one it replaces.

Even so, the two 3.0-litre engines at launch should have enough grunt to get things moving; the diesel, badged 50 TDI, has 282bhp and 600Nm of torque, while the 55 TFSI petrol manages 335bhp and 500Nm; V8 and W12 versions will follow. They’re efficient on paper, too; the diesel manages a claimed 50.4mpg, although we struggled to hit 40mpg during our test. 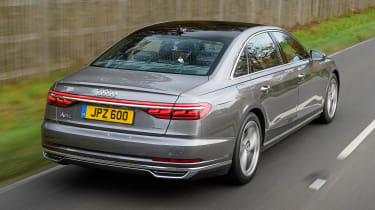 There’s 48v technology under the skin, powering a mild hybrid system that helps the car to get off the line, and shuts down the engine completely if you’re just cruising along on part throttle.

The cabin gets a major overhaul - and the result should appeal to those after a tech-laden limo. There’s an ultra-high-res version of Audi’s Virtual Cockpit digital instrument panel, naturally, but the centrepiece of the front facia is a dual-screen set-up that pairs a 10.1-inch display in the normal position (centre of the dashboard) with an 8.6-inch one positioned below it.

The idea is that you can interact with both display, but that the system uses the lower one to allow a wider range of inputs. The interface takes a bit of getting used to - not least the amount of effort required before the system ‘confirms’ a press with some haptic feedback - but once you’re up and running, it’s pretty special. And quicker to use, we reckon, than the COMAND system in the S-Class. On this score at least, Audi has Mercedes on the run.

What hasn’t really changed, though, is the UK roads’ ability to expose the A8’s inherent firmness to a greater extent than the motorways in Germany or Spain. It’s not unbearable, and in the vast majority of driving you’ll be very comfortable indeed. But sharper road imperfections and our lovely walloping big potholes do judder back through to the Audi’s cabin in a way that they wouldn’t quite in a Mercedes S-Class. To Audi’s credit, the difference is more subtle than it’s ever been. To Mercedes’ credit, it’s still there. 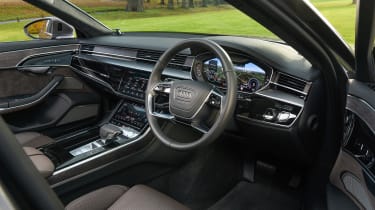 The trade-off for this is pretty decent body control - perhaps better than it needs to be on a car whose main purpose is, let’s face it, to waft around with well-heeled customers in the rear seats. But if the idea of threading a 5.3-metre-long limousine down a country lane with gusto is the reason you’re reading this, then, yes, the A8 can do this with surprising aplomb. It’s unusually nimble around town, too - helped by four-wheel steering that reduces its turning circle.

UK roads are, in effect, the cause of the A8’s only notable flaw on the refinement front. The diesel engine fades away almost completely at a cruise, and the insulation from wind noise is particularly effective too. But some of our more gruff asphalt surfaces catch out the A8’s hefty tyres, and the resulting roar is transmitted through to the cabin a bit more than we’d like.

Of course, your Audi salesman will be quick to tell you that the A8 is the first production car to offer Level 3 autonomous tech. And this is true. But while the hardware is present, the legislation is not - so for now, the A8’s self-driving functions extend to, well, pretty much the same standard you can find in most premium cars. Which is to say that it has an effective adaptive cruise control but it can’t park itself while you watch it from outside. Expect a download or dealer update to that effect sometime in 2018.