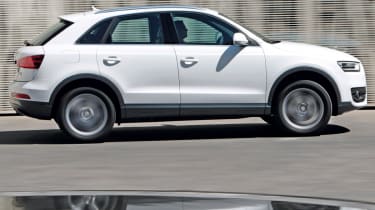 As diesels are so popular in this country, the 208bhp 2.0 TFSI is predicted to make up only five per cent of Q3 sales. It’s a shame, because despite using more fuel than the TDI model, it’s a faster and more satisfying car to drive. The well proportioned styling and high-quality cabin are Audi hallmarks, while it looks good value next to the Range Rover Evoque. The newcomer doesn’t have the character and excitement of the baby Brit, although for some buyers, that anonymity will make the Q3 appealing.

The focus is on efficiency with the new Q3. It’s the first Audi ‘Q’ car to be offered in a fuel-saving front-wheel-drive layout. But performance fans needn’t worry – at the other end of the scale is this top-spec petrol model, with 208bhp and four-wheel drive.

As we revealed last week, a storming high-performance Q3 is on the way, using the 335bhp 2.5-litre five-cylinder engine from the TT RS and RS3 Sportback. But that’s not scheduled to arrive until late next year, so for now, this is the quickest variant you can buy.

Video: watch our video review of the Audi Q3

It uses Audi’s familiar 2.0-litre turbocharged engine and comes with a seven-speed S tronic twin-clutch gearbox as standard. It’s a tried and tested combination that delivers surprisingly brisk pace. There’s a sporty exhaust note, too, when you use the throttle’s full travel, and it revs smoothly to the red line. The range-topping diesel we drove last week might have the edge when it comes to mid-range punch, but this petrol unit adds a sportier dimension to the Q3.

The gearbox works brilliantly. It’s quick enough to leave in full manual mode, yet also enjoyable when you take control via the wheel-mounted paddles. This petrol version also trumps the diesel in terms of handling, feeling lighter on its toes and faster to react. Through corners, though, the Q3 is no sports car.

The raised ride height offers excellent visibility, as well as a commanding seating position, but there’s noticeable body roll in fast bends. You can opt for stiffer and 20mm lower suspension if you order the S line trim (an extra £2,750 over the SE model shown here). We wouldn’t advise it, though – the comfort and refinement offered by the regular suspension is one of the Q3’s highlights.

Another is the beautifully built interior. A new four-spoke multifunction steering wheel takes pride of place, while soft-touch materials and flashes of chrome trim give the layout a quality feel. Even entry-level SE models get an iPod input and a 6.5-inch colour display, although the sat-nav function costs extra.

There’s more room inside than the compact exterior dimensions would suggest (the Q3 is 250mm shorter, 70mm narrower and 65mm lower than the Q5).

Space for five adults, and a maximum load capacity of 1,365 litres, make this a surprisingly practical family car. And with its short overhangs and steeply raked front and rear windscreens, this is the most stylish member of the Q family, too.