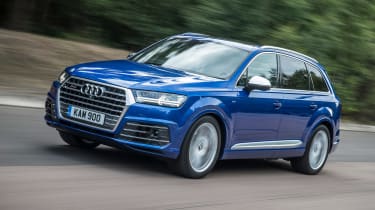 Order books are now open for Audi’s hot new SQ7, with first customer deliveries due in August. The SQ7 is the first Q7 to wear Audi’s ‘S’ badge, and only the second ‘S’ SUV Audi have produced, since the launch of the SQ5 in 2013, and will cost from £70,970.

Featuring Audi’s new electric powered compressor technology, the SQ7 is claimed to sprint from 0-62mph in 4.9 seconds, and produces 900Nm of torque from just 1,000rpm – well outweighing the Range Rover Sport SVR, which makes do with ‘just’ 680Nm.

Efficiency is high for the performance available, with a claimed combined cycle of 39.2mpg, and CO2 emissions of 190g/km – thanks in large to Audi’s focus on weight saving, claiming the Q7 range is on average ‘a grand piano lighter’ than the old model. 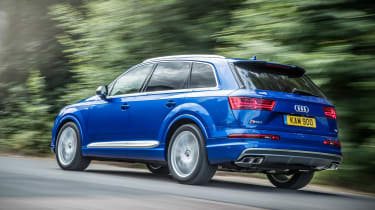 A raft of additional standard equipment benefits the top of the range SQ7, including Audi’s Virtual Cockpit, adaptive air suspension, active sound exhaust system and rear view camera. Audi first previewed the SQ7 to customers over here at the 2016 Goodwood Festival of Speed, showcasing a number of options available - Audi Matrix Technology, 22 inch Diamond Cut Wheels and Night Vision Assistant were among a number of features shown, now available on the SQ7.

Audi claim the SQ7 is the UK’s fastest, most powerful diesel SUV, with the 4.0TDI V8 previewing technology likely to feature in Audi’s forthcoming Q8-baged new flagship SUV, currently undergoing development, and the fourth generation A8.

In a first for Audi, The SQ7's all all-new V8 features twin turbocharging plus an electric-powered compressor to eliminate turbo lag. Audi first showcased the technology in the RS5 Concept Car, with a compressor working alongside the two turbos in the lower rev range to boost off-the-line performance, effectively creating a tri-turbo engine. Rather than rely on exhaust gasses to develop its boost, as it is electrically-powered it will increase power in less than 250 milliseconds.

Stefan Knirsch, member of the Audi board responsible for technical development, said “the electrically driven compressor in the SQ7 TDI is a world first, with which Audi underscores its claim Vorsprung durch Technik”.

The new system means the installation of an additional 48v lithium ion battery underneath the boot floor, although happily it doesn't affect boot space. 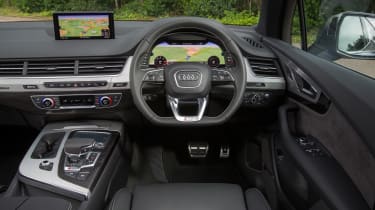 The all-wheel steering means the rear wheels can turn by as much as five degrees – either in the same or opposite direction depending on road speed – while Audi claims that the SQ7 is the lightest SUV in its class, further boosting ride, handling and efficiency, as does the drag co-efficient of 0.34, an impressive figure for an SUV.

The SQ7 gets a mild makeover, too, with its own grille, bumpers and mirror housings, plus side air intakes. LED lights are standard at the front and the back while four rectangular tailpipes feature at the rear.  Inside there’s the choice of two different styles of sports seats, with subtle and adjustable interior LED lighting, while Audi’s digital Virtual Cockpit is fitted with optional head-up display available.

Audi’s top-of-the-line infotainment system is also standard, controlled through the familiar MMI scroll wheel, with a choice of BOSE or Bang and Olufsen 3D sound system’s featuring up to 23 speakers.  Audi also says there are 24 driver assistance systems to help drivers, ranging from autonomous emergency city braking to active cruise control that will also control the steering in slow-moving traffic.

What do you think of Audi's new SQ7? Let us know below...