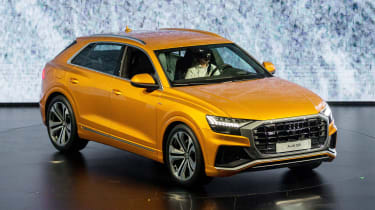 This is the Audi Q8, the German brand’s sister vehicle for the Q7 and a new entry in the increasingly popular coupe SUV sector. It's a rival for the BMW X6 and Mercedes GLE, and will be priced from around £65,000 when it goes on sale in the summer.

The Q8 is 4,986mm long – so it’s actually about 66mm shorter than the Q7. But it shares that car’s wheelbase and is longer overall than both the X6 and GLE. It’s also 27mm wider than the Q7 and this – along with a lower roofline – gives the new arrival a more aggressive, sporty stance.

Up front, the Q8 gets a single frame grille inspired by the original Audi quattro. The coupe-like design and raked rear screen are subtler than on either of its key competitors, translating to improved cabin space and a larger boot. The rear of the car gets a similar lighting signature to that of the latest A8 limousine. 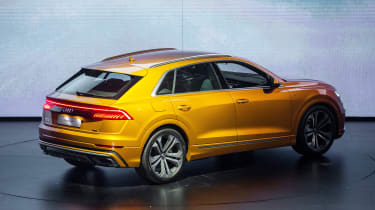 The new Q8 will be offered in a choice of 12 colours, and there will be differing amounts and finishes of body plastic, depending on the trim level chosen. Basic Q8s will get grey plastic surrounds on the wheelarches, whereas higher-spec editions will have painted arch surrounds and a matt-grey finish on the front grille surround, the sill trim and the rear diffuser.

All engines feature 48V mild-hybrid technology, which allows extended stop-start and a coasting function when the throttle pedal is lifted between 34mph and 100mph. All Q8s get quattro four-wheel drive as standard, too. The 50 TDI will use an eight-speed Tiptronic gearbox, while the 55 TFSI gets a seven-speed dual-clutch box. Transmission options for the remaining engines will be confirmed later.

In addition, every UK-bound Q8 will get Adaptive air Sport suspension. Audi Drive Select will also be offered, with up to seven modes that alter not only the suspension but also the steering and engine response. As with Audi’s A8, the Q8 also gets all-wheel steering to help with high-speed changes of direction and manoeuvrability around town.

The Q8 will come with the option of up to 39 driver assistance systems, based on the data streamed in from up to 23 sensors. Audi plans to offer the driver aids in packs. Tour Assist focuses on adaptive cruise control incorporating lane keep and adjustment for speed limit changes. Emergency Assist watches for driver alertness and can bring the vehicle to a halt in its own lane if it feels its user is inactive. 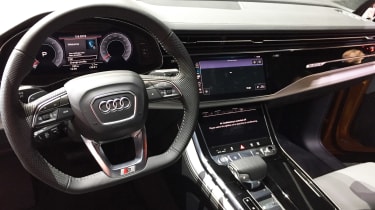 Park Plus Assist brings monitors that can warn you if you’re about to kerb your alloys, and incorporates a novel 3D view that allows you to see the car from the perspective of a drone hovering around outside it. This package also includes remote Park Pilot, which can work with the driver outside of the vehicle. This, along with features like Garage Pilot, will not be available at launch, but instead will be phased in gradually over time. There’s also Trailer Assist, which steers the car and its trailer when reversing, after the driver sets the direction on the Q8’s infotainment screen.

Inside, the front cabin of the Q8 draws heavily on the design and layout of the latest A8. The car’s systems are controlled through a pair of central screens; the upper 10.1-inch display manages infotainment and navigation, while the lower 8.6-inch panel operates the heating and ventilation, as well as allowing text input for destinations or phone contacts. Audi’s Virtual Cockpit digital instrument panel will also feature, along with a head-up display – although the latter feature may yet be optional on lower-end versions.

Audi plans to offer three types of leather upholstery on entry-level Q8s alone. The car will be available as a four or five-seater, and the rear row can slide fore and aft to prioritise cabin space or the luggage area. 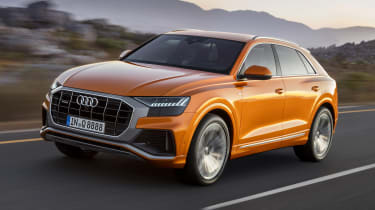 The boot capacity is 605 litres with the regular rear seats in place, and the layout is easily wide enough to accommodate a couple of sets of golf clubs across the boot floor. Lowering the rear seats extends the space on offer to 1,755 litres. This ultimate capacity comfortably trumps the X6’s maximum (1,525 litres) and pips the GLE Coupe’s (1,720 litres). The Q8 will get a powered tailgate as standard, and foot gesture control for the system will be available as an option.

The Q8 will be manufactured in the same VW Group Bratislava plant that produces the Q7, Porsche Cayenne and VW Touareg. It’s due on sale in the UK in July and initial entry V6 versions should start from around £65,000. We expect this to dip below £60,000 when the 45 TDI is introduced in 2019.

Audi isn’t likely to keep the 50 TDI and 55 TFSI as the most potent Q8s for long. The firm is almost certain to be lining up an SQ8 and it has already applied to register RS Q8 for the most extreme variant. That could get the twin-turbocharged V8 engine from the forthcoming RS6, with over 650bhp.

Has the Audi Q8 got what it takes to beat the BMW X6 and Mercedes GLE? Let us know what you think below… 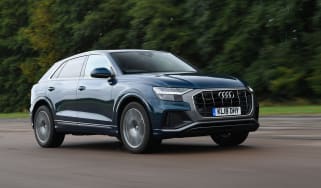 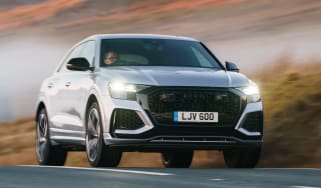 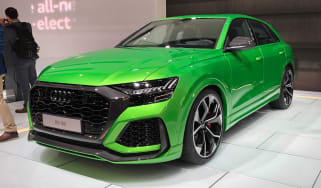