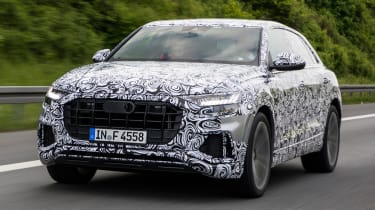 Our early impression of the Audi Q8 is that it feels a cut above the BMW X6 and Mercedes GLE Coupe, but that’s not surprising given it’s a bit larger and will be more expensive. The cutting-edge cabin is the cherry on top.

The Audi Q7 has been the brand’s flagship SUV for just over a decade, but that’s about to change. Say hello to the Q8, a sportier take on the biggest Q car, with a svelte, coupe-influenced rear end and all of the company’s latest tech.

We had an early ride to see how the range-topper is shaping up ahead of its official reveal in the coming weeks.

Like all recent new Audis, this pre-production version boasts 48-volt mild hybrid assistance, alongside a 282bhp 3.0-litre V6 TDI engine. It’s a set-up found in the brand’s A8, A7 and A6 saloons. 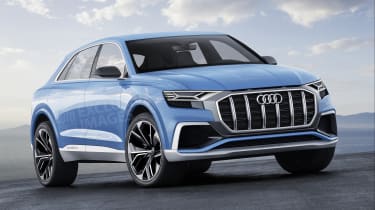 Having more than 600Nm of torque allows the Q8 to sprint from 0-62mph in less than six seconds, while the SUV’s top speed, as ever, is limited to 155mph.

Our ride was in a car equipped with air suspension and huge 22-inch alloy wheels. Audi says its engineers have worked to inject a sportier character into the Q8 over the Q7, despite the pair sharing their underpinnings.

Particular attention has been paid to the Dynamic driving modes. When selected, Audi says these make the steering much sharper than before, and from the passenger seat the throttle response noticeably changes, while the air suspension firms up nicely to improve the car’s body control.

A glimpse under the covers inside reveals a lot of A8, A7 and new A6 interior elements, so the latest dual haptic touchscreen set-up sits in pride of place in the middle of the cockpit. It’s a total revolution compared with the system in the Q7, and a big selling point.