The new Audi A6 has arrived, but is it a serious challenger to the BMW 5 Series and Mercedes E-Class? We get behind the wheel to find out...

The new Audi A6 represents a big leap forward over its predecessor in pretty much every area. It looks smart, drives well, and is bigger and better equipped than before. What’s more, the technology it contains puts it right at the top of the class. The BMW 5 Series and Mercedes E-Class no longer have this class to themselves.

It’s hardly surprising to discover that the eighth-generation Audi A6 is also the most technically advanced, the most efficient, the biggest inside and out, and also the most dynamic to drive – according to the people who have created it.

Yet the aspect that strikes you first about the A6 is just how elegant it appears in the flesh; how much impact it delivers visually in amongst everyday traffic. So although Audi’s claims that the new A6 brings numerous new technical innovations to this class are undoubtable – these include optional four-wheel steering, a range of new electronic driver assistance systems and even greater connectivity on the move – it is the sheer presence of the car that dominates your initial impressions.

It needs to offer more than just good looks, though. The A6 has some extremely tough opposition to square up to, in the form of the current BMW 5 Series and Mercedes E-Class. 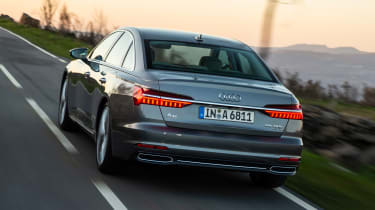 To begin with, there are three engine choices, all equipped with what Audi describes as a “mild hybrid” system, which allows the engines to coast at cruising speeds to enhance overall efficiency by at least five per cent. The entry level A6 will use a new 2.0-litre four-cylinder diesel with 201bhp and adaptive dampers. Expect this model to be the biggest seller in the UK – with a price starting at under £40,000 when the car goes on sale in September.

Topping the range until the S and RS models appear later in the car’s life-cycle, is a 3.0-litre V6 petrol we’re driving here. It gets 335bhp and 500Nm, and is good for 0-62mph in 5.1 seconds. It’ll be priced similarly to the 50 TDI, although Audi UK has yet to establish firm prices for any of the new A6s just yet.

Technology lies at the heart of the new saloon, and it’s there in abundance. Audi uses it to enhance not just the dynamics, but also the ease of use, comfort, safety and general connectivity of the car – and you can sense this from the moment you climb aboard.

The cabin feels uniquely well built, with an extraordinary sense of quality, and a stylish new design for the dash and centre console. There’s a plethora of new TFT displays; one that functions as the main instrument panel directly in front of the driver, plus two more touchscreens in the centre.

Space in the rear is better in every direction, too, with 17mm more legroom and around 10mm more headroom, making the A6 the roomiest car in its class according to the maker. Plus, just as there is in the front seats, there’s a sense of real quality and sporting comfort, with the seats themselves offering fine support. 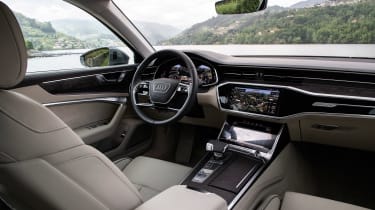 The boot is also competitive (though not class leading) with 530 litres on offer. The space is compromised slightly by the underfloor housing of the mild system’s batteries; 12v in the four-cylinder model and 48v in the V6s.

We tried all three models that will come to the UK, and of these the 3.0 V6 TFSI was the outright pick of the bunch. Unlike the 50 TDI, which feels a touch heavy on the move, the petrol V6 has a deftness of touch and a level of refinement that puts it very close to the 5 Series dynamically.

Both the V6 versions we drove were fitted with Audi’s optional air suspension, which does a fine job of ironing out imperfections in the road surface to provide an impressive level of ride quality across all surfaces. The more conventionally suspended four-cylinder model felt lighter on its feet and more agile, but didn’t have quite the same majesty when cruising along a motorway. 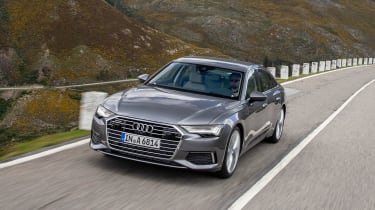 On the other hand, the lighter four-cylinder car feels purer in its responses; more natural – perhaps because there is simply less electronic assistance beneath your hands and backside. It certainly steers more sweetly than the ‘dynamically assisted’ V6 models.

Every car we drove was supremely refined on the move, with near silent motorway running. This is thanks in part to the new A6’s fundamentally stiffer bodyshell, as well as its thicker glass and its increased sound deadening.

It’s a class act, the new A6, and only a full UK twin test with the BMW 5 Series will establish whether it is what Audi claims; that it’s the best executive car on the market. That’s how big a step forward it has taken.