The all-new Audi A6 has officially been revealed. Audi’s answer to the BMW 5 Series and Mercedes E-Class comes with a redesign that takes inspiration from the larger A8, along with more technology and mild-hybrid powertrains as standard across the range. We got our first close up look at it during the 2018 Geneva Motor Show, ahead of it going on sale in the UK this June.

The A6 joins the larger A8 and A7 in the fact that its design was signed off in its entirety by Marc Lichte – Audi’s design boss. On the outside, the A6 is inspired by the A8, but with reduced overhangs, a lower stance, and different body details, all in an attempt to make it appear more “athletic”.

The trademark hexagonal grille is nearly as wide as the A8’s, but the drooping shoulderline and more coupe-like roofline differs from the luxury car. Despite that, the roof is actually taller than before, benefitting passenger space. The drag coefficient has been dropped from the 0.26cd of the old car to 0.24cd, while to save weight many of the exterior panels are made from aluminium. Bosses claim a slight weight increase of between 5 and 30kg depending on model, primarily due to the hybrid system. 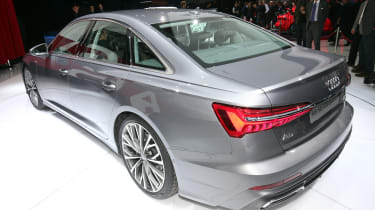 All A6s receive LED lights front and rear, with matrix beam and laser headlights available further up the range. High-spec models gain slick A8-style light ‘animations’ when the car is locked or unlocked. Wheel sizes range from 17 to 21-inches depending on model, while unique bumper designs feature on S-Line models, which also feature a 10mm lower ride height.

The new A6 is fractionally larger than the old model, with a 7mm length increase, yet 12mm added to the wheelbase. Audi claims the interior is 21mm longer, mainly benefitting legroom in the rear seats, while there’s more head, elbow and shoulder room than before, too. The 530-litre boot remains unchanged, however.

The interior carries over Audi’s latest MMI Touch control system, first demonstrated in the A8. While the standard model uses a more basic eight-inch display, cars specced with MMI Navigation plus use a 10.1-inch upper screen for infotainment features, and an 8.6-inch lower display for climate control. Both feature haptic and acoustic feedback so users feel and hear a physical ‘click’ when they select a function. Audi’s 12.3-inch Virtual Cockpit instrument display is also added. 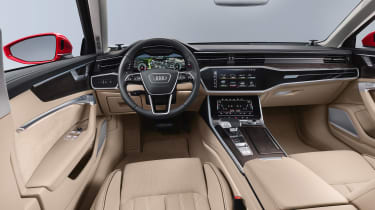 Further tech includes self-learning navigation, using data from service provider HERE to assess your most driven routes and work out the optimum journey. New ‘Car-to-X’ services use data from Audi’s fleet to provide real-time hazard and traffic data, while it will eventually be able to find parking spaces, too.

As well as the usual smartphone app, buyers can spec an Audi Connect Key – a feature allowing up to five smartphones to securely lock, unlock and start the car without a conventional key.

As expected, safety assist features have been boosted, with up to 38 different systems split into three packages – including a side impact pre-crash assist function for the first time. It’s capable of Level 3 autonomous driving, like the A8.

The new A6 will also become the first executive car to offer mild-hybrid technology across its entire engine range. Four cylinder engines will use a simple 12v system with a belt starter-generator, allowing the start/stop function to kick in while the car is still moving up to 14mph. It’s also able to ‘coast’ between 35 and 100mph, switching off the engine when the driver lifts off the accelerator and instantly restarting it when needed. 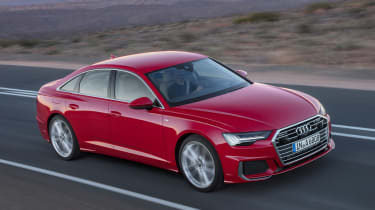 Audi claims that this saves around 4g/km of CO2 in normal driving. V6 engines use a cleverer 48v system mated to a lithium ion battery, which can store energy during deceleration. It reduces fuel consumption and means the engine emit around 10g/km less CO2.

The initial engine range at launch will consist of a 201bhp 2.0-litre four-cylinder diesel, two 3.0-litre V6 diesels producing 228bhp and 286bhp respectively, and a 335bhp 3.0-litre V6 petrol, all mated solely to automatic gearboxes. Bosses tell us a 2.0-litre petrol engine will be offered at a later date.

To complement the fresh engine range, the A6 benefits from new, part-aluminium suspension systems. Everything from passive springs to adaptive dampers and full air suspension can be specified, claiming both a more direct feel and improved ride comfort. A new four-wheel steering system also features, reducing the turning circle by 1.1m, increasing agility and improving high-speed stability. The progressive steering has been given a more direct ratio, too.

Prices for the A6 have yet to be announced, but UK order books are expected to open in June.

Read our first review of the all-new Audi A7 Sportback right here...

Welcome to our Geneva Motor Show hub page, scroll down for all our Geneva content...
Audi A6 review 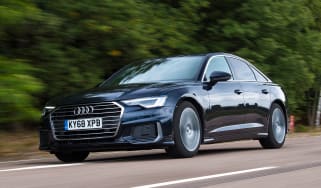