We give our verdict on the new Audi A7 Sportback, as the luxury four-door coupe hits British roads for the first time

Audi’s latest four-door coupe is available with everything you could possibly want if you go heavy on the options list, and it’s delivered in a sumptuous package. This 3.0-litre diesel engine is expected to account for 80 per cent of UK sales, too, and buyers won’t be disappointed with the powertrain. The only blot on its copybook is that it lacks driver engagement – but otherwise, it’s a great cruiser.

SUVs may be the huge breadwinners for premium brands like Audi, but the company hasn’t forgotten its saloon roots. Niche models spun off the back of the traditional ‘three-box’ saloon body shape are in the ascendency; enter the new A7 Sportback, driven here in the UK.

An evolutionary redesign sees the four-door coupe borrow plenty of A8 cues, such as the large front grille and full-width LED tail-light bar at the rear, as well as a similar – although not quite as smart-looking – interior and dash. But quality of finish feels on par with that of Audi’s flagship.

Perhaps the most impressive aspect is the infotainment suite you’ll find upon opening the door. All A7s come with the 12.3-inch Virtual Cockpit digital display as standard, while a team of touchscreen infotainment systems pairs up on the centre console and dashboard. 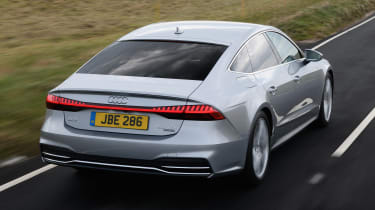 The screens use haptic feedback to deliver a satisfying clicking sensation wherever touched. You can’t really tap lightly as with other touchscreens, and you’ll need to press firmly like a physical button, but it’s very slick once you’re used to it, and it feels ahead of Mercedes and BMW systems. It’s not for everyone, however, and rotary-switch set-ups are easier to use on the move.

The big news is the widespread adoption of 48v mild-hybrid assistance. A 335bhp six-cylinder petrol turbo is on the way, as are a selection of four-cylinder options and a plug-in hybrid. However, early adopters will have to settle for the diesel A7, which uses a 3.0-litre six-cylinder unit.

By no means is the lack of engine choice bad news, though, because Audi’s initial offering is impressive. Its trademark six-cylinder is smooth, and while you might think 282bhp in a car that tips the scales at 1,880kg doesn’t sound particularly sporty, the 620Nm of torque on tap means brisk progress is always a push of the pedal away. 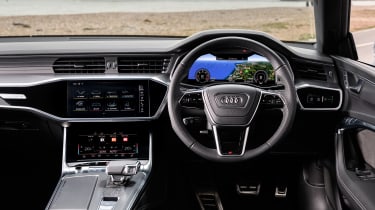 The only thing letting down the response is the transmission; the diesel gets an eight-speed torque converter, and there’s a detectable delay between the pedal going down and the drivetrain loading up.

The main benefit of the 48v primary electrical system is that it allows the engine to shut down completely when coasting between 34mph and 99mph, saving fuel on non-stop highway cruises. The belt generator is used to fire the motor back up when needed, and a haptic nudge on the accelerator pedal tells you when it’s possible to lift off and coast.

That aside, you’d struggle to detect the engine stepping back, and it’s pretty seamless. The main benefit, of course, is economy. Audi claims this huge six-cylinder, all-wheel-drive coupe can do more than 50mpg, depending on spec. 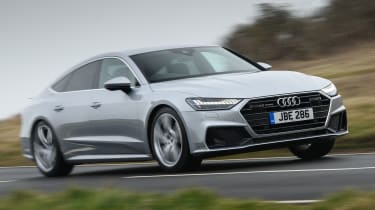 With the powertrain and the assisting technology delivering pretty impressive delivery, the A7 is an excellent motorway cruiser. Miles melt away in relative serenity and comfort. On back roads it feels easy to place around bends for such a large car, and it boasts direct, well-weighted steering. However, it’s not too entertaining, even when flicked into Dynamic on the drive selector. Optional four-wheel steering injects a little extra agility, though.

The adaptive air suspension offers the smoothest set-up, although at £2,000 on the extras list you’d have to think hard about speccing it. There’s little difference between it and the conventionally sprung Sports set-up found as standard on S line cars, and it still isn’t perfect at low speeds.