The new plug-in hybrid Audi A7 Sportback 55 TFSIe promises 149mpg and 362bhp, but does it deliver on the road? 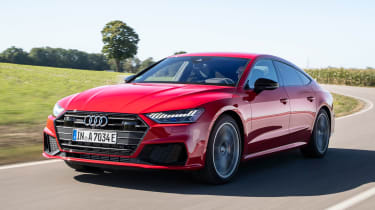 The Audi A7 55 TFSIe is a car of compromises. You gain remarkable efficiency and the potential for short drives completed entirely on electric power. It’s not exactly slow, either, and the cabin remains a beautifully finished place to spend time. But you lose some of the soothing, sumptuous soul of a six-cylinder engine under the bonnet. So perhaps it’s best to describe this version as the pick of the four-cylinder models in the A7 Sportback line-up – and the best choice overall for those with running costs and taxation at the top of their priority list.

Audi really is stepping up its electrification game at present - not only with the e-tron pure-electric SUV, but also with an extensive range of new hybrids, including this: the A7 Sportback 55 TFSIe.

The definitive UK line-up for the plug-in A7 Sportback is still being finalised, but we’d expect the 55 TFSIe to be offered in two trim levels – Competition and Competition Vorsprung. There’s also a less potent 50 TFSIe, with 295bhp, that will be offered with a wider range of trim levels.

Incidentally, all of the above should also apply to the plug-in hybrid versions of the A6, which will also arrive shortly. 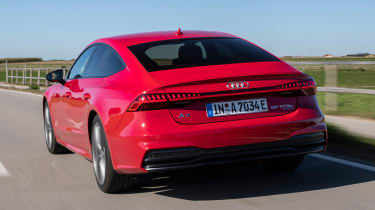 That engine produces 248bhp, and when combined with a single electric motor, the total system output is 362bhp – enough, Audi claims, for the A7 Sportback to reach 62mph in 5.6 seconds and a top speed of 155mph. And this in a car that can travel for about 26 miles on electric power alone, remember, thanks to a 14.1kWh battery that’ll take about two and a half hours to charge via a 7kW domestic wallbox.

These performance figures are impressive enough – and as near as dammit a match for the current fastest ‘non-S7’ version of the Sportback, in fact. But in practice, the hybrid powertrain falls a little short of the sort of brilliance that someone spending what’s likely to be almost £80,000 should expect.

It’s not that the TFSIe feels slow overall; rather that you do have to dig a little deeper into its reserves of performance than you would on a big diesel motor (or a six-cylinder hybrid like the A8’s). And when you do this, the noise from under the bonnet is no better than you might hear on a regular hot hatchback; the four-cylinder motor spools up smoothly enough, but its note is still a long way from the character of Audi’s super-refined V6. Describing it as an ‘appliance’ would be too strong, but you get the idea.

Equally, the dual-clutch auto gearbox isn’t quite as accomplished a performer as the single-clutch eight-speed auto that features in the Q7 and A8. And it retains typical DSG quirks, such as the occasional jerky shift.

It’s perhaps stating the obvious, therefore, to say that the A7 TFSIe’s best moments are those conducted on electric power alone. It’s entirely realistic to tackle a 15 or 20-mile commute, including at least a bit of motorway mileage, without needing the petrol engine at all. And in that environment, the A7’s clever hybrid tech - which uses navigation data and traffic flow to help manage the battery charge level - makes it a very appealing and astonishingly refined companion. 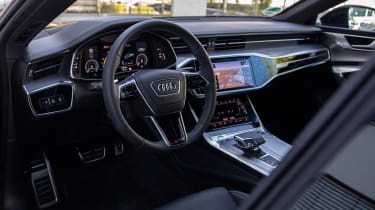 The cabin helps with this too, of course. As in other A7s, you can’t help but be impressed by the quality of the materials, the rock-solid build quality and the amount of gadgetry and technology aboard. Audi’s Virtual Cockpit looks as crisp and slick in operation as ever - but the haptic-feedback touchscreens (which require a lengthy prod from your finger instead of a tap) are a little more fiddly to use, especially on the move.

The rest of the A7 experience remains the same – the steering is accurate and has some weight to it, but it’s pretty uncommunicative, so while the car is pretty easy to place on the road, it never comes close to being involving to drive. The ride isn’t perfect, either; as with the non-hybrid editions, we suspect this will be a car that is particularly susceptible to changes in wheel size. Choose the most extreme diameter alloys at your peril.

The counter to our concerns about the powertrain, of course, is that Audi says A7 Sportback customers are more focused on efficiency than buyers of the Q7 and A8. And there’s no denying that the efficiency figures are impressive for a car of this size and speed; depending on wheel size and trim level, the 55 TFSIe quattro has official ratings of 149mpg and just 44g/km of CO2 emissions. Those numbers alone should make the hybrid A7 Sportback one of the more appealing models in the line-up – even if it does feel a little short on soul compared with some of its stablemates.