Audi A7 vs Porsche Panamera 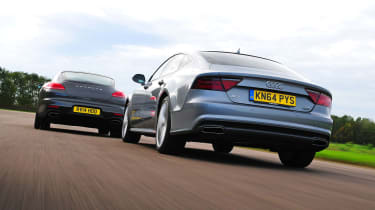 Buyers of high-class executive cars are spoilt for choice these days, and you don’t need to stick to the traditional four-door saloon norm if you want to stand out in the corporate car park.

The latest breed of exec models get sportier styling, and they don’t come much more racy than Audi’s A7 Sportback. It’s only been on sale for four years, but the brand has now launched a facelifted version, with new LED lights and efficient diesel power, as well as the ubiquitous quattro four-wheel-drive system. For the A7’s first test, we’re trying it in top-spec S line trim with 3.0-litre BiTDI twin-turbodiesel power.

However, it will have to back up its racy looks with equally sporty handling to overcome its rival in this test – the Porsche Panamera Diesel. Like the Audi, the Panamera was given an update earlier this year, and its plush interior makes for relaxing progress. What’s more, Porsche’s motorsport know-how means this is an executive express that’s just as capable on a twisting back road as it is on a high-speed motorway cruise.

More reviews for A7

However, the Panamera’s list price is almost £10,000 higher than the Audi’s. So, the question is: does the Porsche’s array of talents justify its higher cost, or has Audi done enough with its revisions for the A7 to emerge victorious?

Follow the links above to read individual reviews, and scroll down to find out the winner of this twin-test... 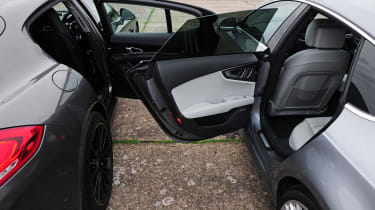 Both cars feature roomy cabins, but only the Audi is a five-seater. Even so, its intrusive transmission tunnel makes the middle seat only really fit for occasional use.

In contrast, the Porsche makes the best of its strict four-seater status. Each rear passenger gets a sports seat, while the transmission tunnel houses a lidded cubby, cup-holders, air-con controls and vents. 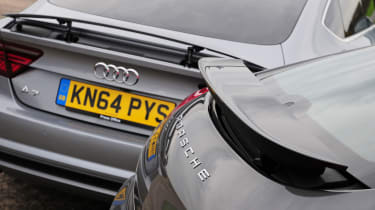 In order to retain their sleek looks and improve aerodynamics, both cars feature powered rear spoilers. The A7’s automatically rises at 80mph and lowers once you drops below 50mph, while the Panamera’s goes up at 75mph and down at 50mph. Both can be activated at any speed via dashboard buttons. 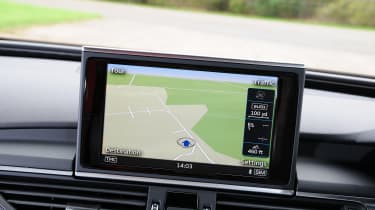 Our contenders come with plenty of standard kit, but you can add lots of extras. For instance, our A7 had an eye-watering £14,310 of options, while the Porsche featured £11,054 worth. This figure included £429 for Bluetooth, which should surely be fitted as standard on a £65,000 car. 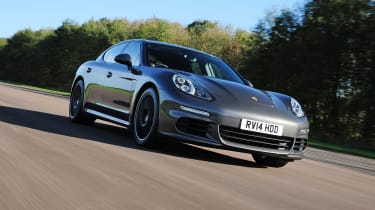 There’s not much to separate these two, as they both tick the luxury and refined cruiser boxes, but the Panamera edges ahead thanks to the way it drives. It has the same involving character that makes Porsche’s sports cars so good, with communicative steering and excellent handling. It also delivers a perfect balance of performance and low running costs, helping to make the Panamera Diesel the pick of the line-up. 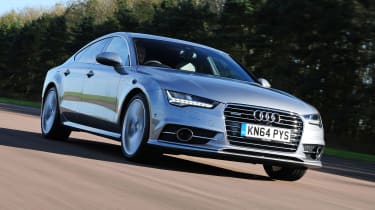 The A7 Sportback is a sporty-looking exec that’s also surprisingly practical, while cabin quality and comfort are on a par with the Porsche. There’s plenty of grip from the quattro four-wheel-drive system, too, and running costs are reasonable. However, while the A7 is rapid and refined on the motorway, it lacks the involving driving character of the Panamera and, as a result, it narrowly comes up short in this test.