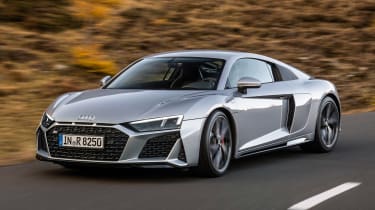 Audi has added a new rear-wheel-drive R8 to the line-up on a permanent basis, which joins the updated and uprated quattro all-wheel-drive versions of the brand’s mid-engined supercar in a new-look line-up.

The R8 was given a thorough facelift this time last year, with a sharp new look and extra power for both the base and flagship ‘S’ versions of the car, both of which use a 5.2-litre V10 shared with the Lamborghini Huracan.

Prior to the facelift a rear-wheel-drive R8 was introduced on a short-term basis. The 532bhp R8 RWS was limited to 999 units globally, and went on sale shortly after its debut at the 2017 Frankfurt Motor Show. 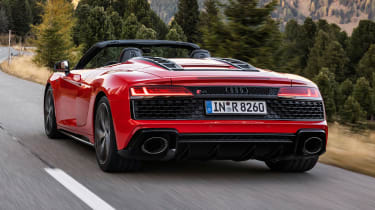 The new rear-wheel-drive Audi R8 RWD sticks with the same amount of power as that car, with its 5.2-litre V10 pushing 532bhp and 540Nm torque to the rear axle and a mechanical locking differential via a seven-speed dual clutch gearbox. The new addition sits below the R8 quattro, now packing 562bhp, and the R8 Performance, which produces up to 612bhp.

It’ll be available in both Coupe and drop-top Spyder body styles, boasting the same aggressive makeover as the rest of the line-up, save for one or two fresh additions. It gains new sideblades in gloss black, while the blades at the front of the car and on the rear diffuser are gloss black, too. Inside, a shiny ‘RWD’ badge has been fitted to the dashboard, opposite the passenger. The R8 RWD rides on 19-inch wheels as standard, with a 20-inch set available on the options list.

Audi claims that the Coupe version of the new R8 RWD is capable of 0-62mph in 3.7 seconds, topping out at 199mph. The Spyder is a tenth of a second slower from 0-62mph, clocking up the benchmark sprint in 3.8 seconds and topping out at 197mph.

With the front driveshaft removed, Audi says that the chassis setup of the new R8 RWS allows for controlled drifts when Sport mode is selected. The kerbweight of both RWD editions drops by 65kg over their Quattro all-wheel-drive equivalents.

Both Coupe and Spyder RWD models go on sale across Europe in early 2020, with exact UK pricing to be confirmed.

What do you think of the new Audi R8 RWD? Would you pick it over the quattro versions? Let us know your comments below...