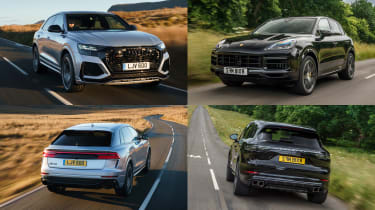 Audi’s RS division has been going strong for decades. Its first-ever model – the RS 2 – arrived in 1994, focusing on practicality and performance in one package.

But as proof of how the market has changed over the past quarter of a century, while the RS stable still offers fast estates such as the RS 4 and RS 6 Avants – and very good they are, too – buyer demand has seen the rise of the performance SUV for those who want both space and speed. As such, the RS Q8 is one of Audi Sport’s latest models, and while it might have arrived a few years after super-SUVs such as the Porsche Cayenne Turbo, it packs plenty of punch.

Interestingly, Porsche helped to engineer the RS2 – and now the four-ringed brand is battling its German rival head to head. So which is the better hot SUV? 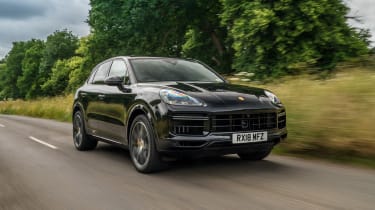 The Cayenne Turbo shares many components with the RS Q8. The basic platform is the same, while it uses a similar engine, too. However, both items have been tuned by Porsche to give the Cayenne Turbo its very own character.

While the RS Q8 might hold the Nürburgring lap record for an SUV, it’s immediately obvious that it’s not as involving as the Cayenne Turbo, even though it’s slightly quicker. The Porsche’s steering has more weight, but a greater sense of connection to the chassis through the wheel rim means you’re more confident driving the Cayenne energetically.

There’s an impressively high level of grip for such a big machine, but then the Porsche is 140kg lighter than the Audi. Despite the Cayenne Turbo’s 4.0-litre twin-turbo V8 pumping out ‘only’ 542bhp and 770Nm of torque compared with the RS Q8’s bigger figures, this weight reduction means the Porsche is only 0.1 seconds slower from 0-62mph, at 3.9 seconds with the Sport Chrono pack. The relative lack of mass means the deficit in power and torque isn’t that obvious on the road. 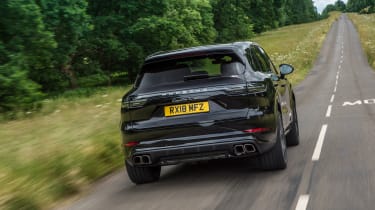 As with the RS Q8, four-wheel drive means traction is excellent, but even though the Audi gets a special rear diff, too, the Porsche does feel more adjustable on the throttle. The Cayenne’s chassis is more deft in its ability to alter its line and stance in a corner, while it doesn’t roll around much, either.

There aren’t quite as many modes as in the RS Q8, with only four selectable settings compared with the Audi’s eight, some user-configurable. In the sportier modes the Porsche corners hard, though. It doesn’t just feel like it’s clinging on as the RS Q8 does; the handling has a genuine sense of enjoyment.

Standard adaptive air suspension controls the front and rear multi-link set-ups. This is most apparent in the firm modes, mostly in roll resistance. The high-quality damping absorbs bumps, but the default setting gives good comfort, too.

Even on standard 21-inch wheels, the Cayenne Turbo feels as firm as the Audi. More details of the road’s surface is relayed through the suspension to the cabin, but it’s still comfortable.

It’s just as slick as the Audi inside: nicely trimmed and packed with tech. And although it lacks some kit in comparison, LED lights, climate control, heated leather sports seats, all-round parking sensors, cruise control, nav and CarPlay are all included. While active roll control is part of a £2,315 package and keyless operation is £816, there’s still more than enough standard kit to feel luxurious, while the Porsche rides just as well, and feels the more capable, memorable and involving car here 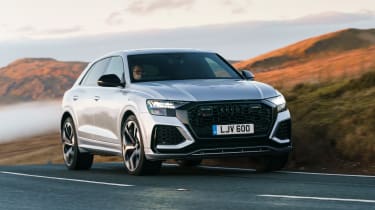 The RS Q8 uses many engineering elements plucked from different areas of the VW Group. The chassis is based on the MLB evo platform, while the engine is Audi’s own version of the 4.0-litre twin-turbo V8. Here it has 48-volt mild-hybrid tech and cylinder deactivation. The chassis features a multi-link layout at each end, with RS-specific adaptive air suspension that changes its characteristics with the drive mode – also adjustable via the RS Drive Select feature.

There’s also active roll stabilisation to help keep the big, heavy SUV as flat as possible and therefore more stable through quick corners. The steering is remote, though. You’re sat so high from the road in the RS Q8, and the active roll control removes the sensation of lean to some degree, that it’s hard to tell quite how far and fast you can push on the road.

This car is not about cornering delicacy and handling, though. Yes, there’s plenty of grip and it clings tenaciously to bends, even if it inspires less confidence than the Porsche, but the idea is to get the RS Q8 straight and deploy its huge firepower.

With 592bhp and 800Nm of torque the RS Q8 will hit 0-62mph in only 3.8 seconds, leaning on the quattro 4WD for superb traction. Its huge low-down torque swells the performance from virtually idle. There’s very little turbo lag while it revs hard all the way to the limiter. 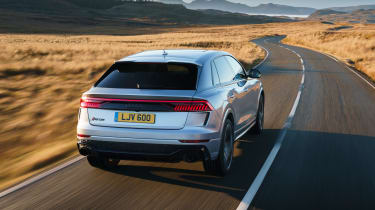 Yet although this is the world’s fastest SUV around the Nürburgring, it isn’t very involving and leaves you feeling cold. At least the V8 adds some interest. The sports exhaust gives a deep and rich sound signature; it sounds expensive at high revs but is bassy and characterful low down.

In an urban setting the RS Q8 makes plenty of sense, because despite its 22-inch wheels, the air suspension gives a relatively comfortable ride. At higher speed, cats’ eyes and potholes do thump those alloys back into the wheel housings, but in low-speed town driving and at medium speed on B-roads, plus at a motorway cruise, the RS Q8 is comfortable and refined, as any SUV should be.

The cabin layout is familiar and the materials are great. The RS Q8 is a brilliant example of how and why Audi does interiors so well, mixing good ergonomics with lovely build and quality. 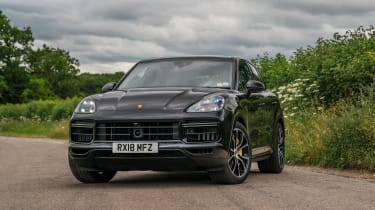 The Cayenne Turbo is the more involving performance SUV of this pair. It’s just as fast as the Audi on the road, but it handles better, steers more sweetly and should be ever-so-slightly cheaper to buy and run. The added practicality is a real bonus, while tech and quality match the RS Q8’s. 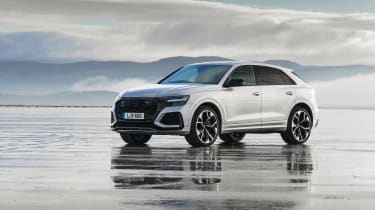 The RS Q8 serves up power, performance, prestige and practicality, yet it just lags behind the Porsche on all but the first count. The tech is great, but this SUV lacks a little of the Cayenne’s space and versatility, as well as the Porsche’s level of communication and involvement, given these cars’ size.

Check out our other group tests here...