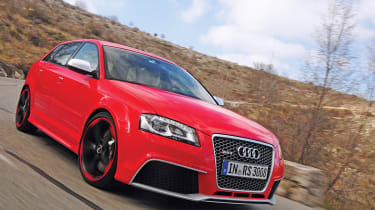 The Audi RS3 is an impressive machine. It handles well, is easy to drive and, considering the performance on tap, is reasonably economical, too. It may not be the last word in involvement, and you can have more fun for less money, but no car offers this level of pace in such a desirable and usable package for less than £40,000. Plus, this is the cheapest way to get one of the finest engines currently in production: Audi’s 2.5-litre five-cylinder turbo.

An intoxicating five-cylinder warble reverberates around the mountains as we accelerate out of yet another switchback hairpin, all four tyres scrabbling for grip. Of course, the craggy walls have heard a similar sound before.

That’s because we’re driving the new Audi RS3 Sportback up the famous Col de Turini in the south of France – the very place where its ancestor, the original Sport Quattro, won the 1984 Monte Carlo Rally in the hands of ex-world champion Walter Röhrl.

It may be deluded, but there’s the sense we are probably not too far off the pace the legendary driver set all those years ago. That’s not a reflection of our ability, though – rather, the devastating speed at which the RS3 covers ground.

You can thank the incredible 2.5-litre turbo for that. Taken from the TT RS, it’s the heart and soul of the car. With 335bhp on tap, 0-62mph takes only 4.6 seconds. This time beats not only that of the RS3’s main rival – the BMW 1-Series M Coupé – but also the Porsche 911 Carrera S. In fact, Audi’s own R8 V8 is no faster over the benchmark sprint. Yet it’s the spread of torque that’s most telling. The maximum 450Nm is available from only 1,600rpm and remains constant all the way to 5,300rpm, while the seamless action of the S tronic seven-speed dual-clutch gearbox, whether in paddleshift or automatic mode, means there’s no let-up in thrust.

Some purists may complain that, unlike the TT, the RS3 won’t come with a manual option. But Audi reckons the car’s target audience doesn’t want one. Core customers are after something that’s super quick, yet very easy to live with every day. That’s also why the RS3 is offered only as a five-door. According to the manufacturer, a three-door would deliver little extra practicality over the lighter TT RS, which is also slightly better to drive.

Don’t take that to mean the RS3 doesn’t handle well, though. Body control is excellent, thanks to a widened track and 25mm lower ride height over a normal A3 Sportback, plus springs and dampers that are around 25 per cent stiffer than those in the S3.

Admittedly, the ride is very firm. However, it never feels uncomfortable, at least not on the smooth, winding roads along the Col de Turini, where the grippy quattro all-wheel-drive system pays dividends. Make no mistake, there’s an impressive efficiency to the RS3.

But if there is a drawback, it’s that you can feel a little isolated from the action. That’s partly because it’s almost too easy to drive quickly, and while the electric power-steering is fast, accurate and weighty, it feels slightly artificial.

You could argue that price is another problem. Nearly £40,000 is a lot for an A3, no matter how fast it is. But then, the RS does look a bit special thanks to its bodykit. In typical Audi fashion, this is sufficiently aggressive without being overly showy.

Equipment is reasonable, too. Standard features include sat-nav, climate control, leather seats and a Sport button, which sharpens the throttle response and opens a valve in the exhaust to make the engine note even more raucous. Needless to say, that got a lot of use during our trip up the Col de Turini.