Storming new super hatch offers huge turn of pace, but does it deliver on driver thrills? 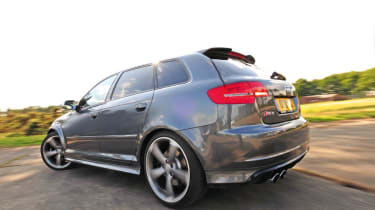 Audi has a reptuation for producing stunningly fast yet subtle and practical sports cars – and the new RS3 has stuck to that script. It’s powered by one of the world’s best engines, with a great soundtrack, and the quattro four-wheel drive makes it easy to drive fast in any weather. As fast as it is, though, it’s not as involving or as fun as the similarly priced BMW 1-Series M Coupé. That won’t matter to fans of the brand, but it might stop Audi from attracting new customers.

Advertisement - Article continues below
The hot hatch has been redefined – now it’s the turn of the super hatch. The new RS3 packs 335bhp from a 2.5-litre five-cylinder turbo that sits in a five-door Sportback body, and is the fastest compact family car Audi has ever made.
We’ve already driven it on the twisty rally stage roads of the Col de Turini in France, but how does the £39,900 machine stack up in the UK?
*Video review from the international launch of the RS3*
Capable of doing 0-62mph in 4.6 seconds, the RS3 is as quick as Audi’s V8-engined R8 supercar, yet seats five and has a 370-litre boot. As well as being practical, it’s well kitted out, with climate control, sports seats covered in Nappa leather upholstery, sat-nav and Bluetooth as standard – not to mention quattro four-wheel drive and a seven-speed S tronic twin-clutch gearbox.
Advertisement
Advertisement - Article continues below

On first impressions, though, you might wonder what the fuss is about. Yes, the wheelarches are flared and, yes, they’re filled with 19-inch Titanium-finished alloys, but our metallic grey car didn’t turn many heads. Expect only those in the know to spot the twin exhausts, big air intakes and RS3 badges. And it’s a similar story inside, with a flat-bottomed steering wheel and those seats the major changes.
Advertisement - Article continues below
Around town, the RS3 proves very easy to live with – unlike most S or RS-badged Audis, the ride is actually pretty good. It’s firm but not crashy.
The gearbox is smooth, too, while the 2.5-litre engine is quiet on light throttle openings and that long seventh gear makes for hushed high-speed cruising.
It all feels extremely civilised.
But there’s another side to the RS3. To reveal it, flick the gearlever into manual, which allows you to take full control of the ratios, and press the Sport button, which sharpens response and opens a valve in the exhaust.
Floor the throttle, and you will be pinned hard into the seat, as the wonderful five-cylinder warble makes the hairs stand up on the back of your neck.
Advertisement
Advertisement - Article continues below
Without doubt, the RS3 has one of the world’s best soundtracks, mixing a deep off-beat thrum with just the right amount of turbo whoosh. And with 450Nm of torque spread between 1,600rpm and 5,300rpm, there are no holes in its delivery, either – only easily accessible, absolutely crushing performance. Swift changes from the S tronic box further enhance this towering punch; each flick of the steering wheel-mounted paddle barely interrupts the amazing thrust.
Advertisement - Article continues below
And the RS3 treats corners with as much disdain as it does straights. It stays extremely flat, thanks to a widened track and 25mm lower ride height over a normal Sportback. The springs and dampers are 25 per cent stiffer than those in the S3, so it’s extremely agile, too.
There is some understeer on the limit, but you’d have to be going very fast indeed on a public road to encounter it. And the real attraction for most buyers will be the confidence and security that
the quattro four-wheel-drive system provides. Few cars can accelerate as hard and with as little drama out of a wet T-junction as an Audi RS3. A powerful rear-drive model such as a BMW 1-Series M Coupé wouldn’t see which way it went.
But for all its ability, there’s something missing. Unlike the R8 and previous-generation RS4, the RS3 doesn’t involve the driver as much as it should. The steering feels artificial, while the automatic box is, if anything, too efficient and clinical. This car is so easy to drive quickly that it’s not much of a challenge.
Despite this, the RS3 is such an incredible exercise in no-nonsense A to B performance, there’s simply no doubting its status as a super hatch.
Advertisement
Share this on TwitterShare this on FacebookEmail
Advertisement