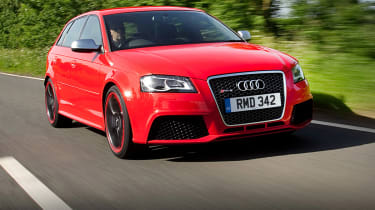 The ultimate incarnation of the second-generation A3 - the Audi RS3 is one of the hottest hatchbacks money can buy. Under the bonnet the same 335bhp turbocharged 2.5-litre five-cylinder engine found in the TTRS puts its power onto the road via the firms famous quattro all-wheel drive system. Only available in the practical five-door Sportback body shape the RS3 comes exclusively with the S tronic dual-clutch gearbox but a near £40,000 price tag means it isn’t cheap.

The Audi RS3’s delivers serious performance with consummate ease. The combination of four-wheel-drive traction, a rapid-fire twin-clutch gearbox and launch control means a supercar-humbling 0-60mph time of just 4.4 seconds.Thanks to unbreakable traction and very high grip levels it’s hugely reassuring on a twisty road, while the five-cylinder engine note and racy exhaust warble create a lovely soundtrack. However, the controls lack feel and the RS3 isn’t as agile as lighter rivals, while the firm ride gets tiring on long trips.

With all-wheel-drive and a turbocharged five-cylinder engine the RS3 obviously isn’t the most efficient car in the A3 range. Official combined economy is 31mpg with emissions of 212g/km. This Co2 output combined with a near £40,000 price tag makes for hefty company car tax bills, although fixed priced servicing and strong residuals are a plus for private buyers.

As with other S and RS models, the RS3 gets trademark silver door mirror housings and a subtly sporty look. The chrome ringed lattice grille, bulged arches, wider sills and huge 19-inch wheels all add to the racy but classy image. Unfortunately, the A3 made its debut in 2003 so the lines of this familiar car now look a little old fashioned.It’s a similar story inside, where the cabin design is showing its age, although there’s no faulting build quality, while RS badges inside and out reinforce the RS3’s status.

Thanks to its practical five-door body the Audi RS3 beats a lot of similar performance rivals in terms of versatility. The 302-litre load bay isn’t huge but the folding the rear bench means a useful 1,032-litre maximum load space. It’s also a genuine five-seater and the upright bodywork means rear occupants get a decent amount of head and legroom.

There is no shortage of safety kit onboard the Audi RS3. It gets stability control with a sport setting along with driver, passenger and side airbags . Only the A3’s four-star EuroNCAP crash test result tells you it is getting on a bit. As for reliability, the A3 has been around long enough for problems to be sorted out while the quattro and S tronic components are well proven.