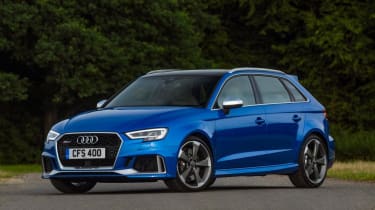 Two decades ago the Ferrari 360 was a state-of-the-art junior supercar with its 400bhp V8. This Audi packs similar power in a practical package that allows you to take the whole family (and their luggage) with you. Cheaper to buy and run than the Ferrari, the RS 3 is a performance-car bargain, although it’s still not cheap to own – especially if you drive it as it was designed to be driven. A quick scan of owners’ forums reveals how highly those who’ve bought an RS 3 rate it; the only downsides seem to be the big fuel, maintenance and insurance bills.

Audi is no stranger to usable high-performance cars. Ever since the arrival of the original Quattro in 1980, the company has offered fast, family-friendly models with the added security of four-wheel drive, and that’s especially the case where its thrilling RS family is concerned.

The first of the line was the 1994 RS2 estate, built in conjunction with Porsche, and ever since then we’ve had a slew of hatchbacks, saloons, coupés, estates, SUVs and convertibles with plenty of power, discreet looks and drive to all four wheels.

The RS 3 is Audi’s smallest RS model yet, and it happens to be the most affordable as well. However, it’ll still sprint from 0-62mph in four seconds, so it’s no soft option. 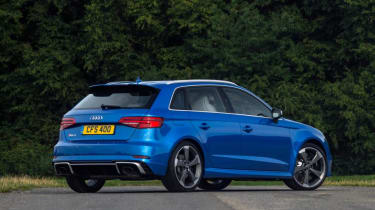 Audi’s original 335bhp RS 3 was on sale between 2012 and 2013; an all-new 362bhp model based on the third-generation A3 reached UK showrooms in July 2015. It was available only in five-door Sportback form, priced from £39,950 and powered by a turbocharged 2.5-litre five-cylinder engine. All RS 3s had a seven-speed S tronic dual-clutch auto gearbox.

A revised RS 3 Sportback was introduced in September 2017, now with 395bhp to give 0-62mph in just 4.1 seconds. At the same time an RS 3 Saloon was launched; it was mechanically identical to the Sportback but with a different bodyshell. Standard equipment was the same as before, while key options included ceramic brakes and an uprated exhaust for a fruitier soundtrack.

You don’t have many choices to make because all RS 3s have an automatic gearbox, so it’s mainly a question of working out whether you want a five-door hatchback or a four-door saloon; the former is by far the most common body shape.

Optional extras included electric seat adjustment, magnetic ride suspension, an upgraded hi-fi and navigation. The latter was available for £495 and it’s a common fitment; it was also offered for £1,495 as part of the Technology Package that brought a larger (seven-inch) display as well. A panoramic roof is a desirable option that few cars have; it originally cost £950 extra.

Alternatives to the Audi RS 3

If you want a four-wheel-drive hatchback with searing pace, the 355bhp (376bhp from September 2015) Mercedes-AMG A 45 might suit. As with the Audi it blends accessible performance (and lots of it) with practicality and high running costs. These attributes also apply to the BMW M135i, which morphed into the M140i in May 2016. With power going only to the rear wheels rather than all four, it’s more fun to drive but less usable than the 4WD alternatives in adverse weather conditions.

If you can live with 300bhp rather than 400bhp, consider the Ford Focus RS, Honda Civic Type R and Volkswagen Golf R. All are far cheaper to buy than the RS 3, but they’re still extremely fast despite the power deficit.

Instead of a spare wheel of any kind, there’s a tyre mobility kit in the boot – and you don’t get a well for a spare wheel to go in.

If they were willing to pay an extra £2,495, RS 3 buyers could specify the Dynamic Package Plus, which raised the top speed to 174mph.

You’d think heated, folding, electrically adjustable door mirrors would be standard on a car such as this, but they were a £150 extra.

Other options that are worth keeping an eye out for on a potential buy include a reversing camera and cruise control. 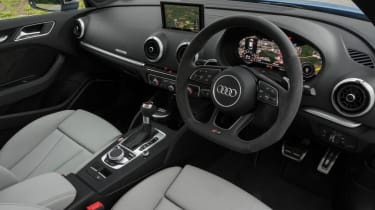 Based on the standard A3, the RS 3 shares that car’s classy cabin but has much sportier seats. It’s crammed with premium materials and is spot-on ergonomically, plus there’s plenty of leg and headroom in the rear. Boot space is generous as well; the Sportback has 335 litres with the seats in place and 1,175 litres when they’re folded, although the saloon offers 315 or 770 litres.

All RS 3s come with variable servicing allowing 9,000 to 18,000 miles and up to two years between garage visits. An initial inspection including an oil change, along with new oil and pollen filters, is pegged at £414.

After this services alternate between intermediate and major, at £309 and £465 respectively. But these are discounted rates on the understanding that by the time the car needs its second service, it’ll be three years old; rack up the miles quickly and the bill could be higher. 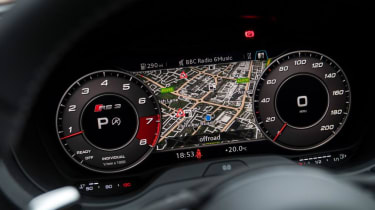 Fresh brake fluid is required every two years (at £65), and because the engine is equipped with a timing chain, there’s no cambelt to replace.

The A3 Mk3 on which the RS 3 is based has been recalled only once. The campaign, launched in November 2017, affected just 30 A3s and Q2s built in August that year, and related to rear hub carriers failing because of a manufacturing fault. It’s unlikely the RS 3 was included, but to be sure, enter the chassis number into the search facility at https://car-recalls.eu/vin-check-recalls/audi.

The A3, S3 and RS 3 are all ranked as one model in our Driver Power satisfaction surveys, and finished 46th in the new car poll and 29th in the used survey. It’s the fit and finish that owners like the most about their Audis, with the infotainment systems winning lots of praise as well. Nothing scores badly, although running costs aren’t rated as highly as they could be.