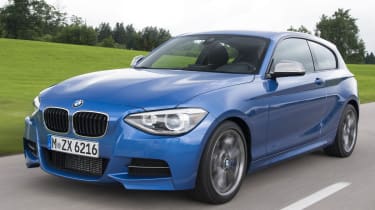 It’s not an official M car, but the M135i has the hallmarks of an M legend. The glorious six-cylinder engine has pace to spare, and driving it leaves a smile on your face. But the smooth auto and forgiving adaptive suspension mean you can use it every day. If you can do without built-in sat-nav it’s fully loaded too, which makes the sub-£30,000 starting price more reasonable.

The BMW M135i is a hot hatch that makes even the 276bhp Vauxhall Astra VXR seem puny. It’s also the first petrol model from BMW’s new M Performance sub-brand, and the first three-door version of the new 1 Series we’ve had the chance to test.

With 316bhp from its 3.0-litre turbocharged engine, and a 0-62mph time of 4.9 seconds, it can outdrag a Porsche Cayman R in a straight line. But it promises more everyday usability than the last fast 1 Series, the M Coupé.

Under the skin, this is a very different car to the M Coupé. Firstly its six-cylinder engine has one turbo instead of two, plus there’s no limited slip differential. It also uses adaptive dampers instead of rock-hard fixed-rate units, and comes with the option of an eight-speed auto, unlike the manual-only M Coupé.

But don’t think for a second that this car is soft. The engine’s performance is thrilling and it sounds fantastic – the raspy engine note fills the car and there are muffled pops and bangs from the exhaust on the overrun.

What sets this powertrain apart, though, is its smoothness, even as you scream towards the 7,200rpm red line. This is partly thanks to the superb eight-speed auto.

The standard M Sport adaptive suspension is 10mm lower than the standard car’s, but in Comfort mode it’s forgiving enough for daily use. However, scroll through the driving modes – which also tweak throttle response, gearchange speed and steering weight – and it gets significantly firmer.

Our only gripe was with the variable-ratio steering, which is precise, but a little too light for a car this fast. Hitting a bump mid-corner causes the wheel to wriggle in your hands, which can upset the car’s balance. That aside, grip is impressive, throttle response is immediate and when you want to drive like a hooligan, it can do things the 4WD Audi RS3 can’t.

If you plan to use your M135i as a family car, a five-door version will be available in September, although 75 per cent of buyers are expected to take the three-door. It’s easy to see why – it looks great, with deep side scallops, 18-inch alloys, M Sport bodykit and that hallowed badge on the boot.