The engine really is the star of the show in the new Audi RS 3 Sportback, with power now up to 395bhp 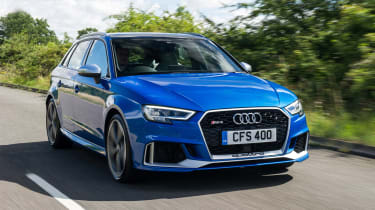 Devastatingly quick, easy to live with and powered by one of the best engines in the business, the Audi RS 3 Sportback remains a standout hot hatchback. It’s still not the most nimble on the road, but the 2.5-litre turbocharged five-cylinder engine is the star of the show. However, whichever way you look at it, the RS 3 is seriously expensive, and that’s before you even glance at the extensive options list.

Look back 10 years, and the only place you’d find 400bhp was in exotic Italian sports cars and high-performance executive saloons. Today, you’ll find that figure in the updated Audi RS 3 – a family hatchback with space for five adults and their luggage.

This may be the entry-level Audi RS model, but there’s nothing basic about its performance credentials. The changes for this updated version revolve around the engine; the 2.5-litre five-cylinder turbocharged motor remains, albeit with a range of extensive tweaks to help produce more power and more torque – yet without any real detriment to efficiency.

The hand built engine is 26kg lighter than it was in the outgoing RS 3 thanks to the use of a lightweight alloy crankcase and hollowed crankshaft. Power and torque now total 395bhp and 480Nm (an increase of 33bhp and 15Nm over its predecessor), forced through all four wheels via Audi’s venerable quattro all-wheel drive system.

Once behind the wheel it’s that 2.5-litre five-cylinder motor that dominates the driving experience. Even at idle there’s a metallic gargle to the exhaust note, emphasised significantly if you go for the optional (£1,000) RS sports exhaust system.

In fact, it’s this that marks out the RS 3 from its hyper-hatch rivals. That initial rumble builds into a deep chested bellow as the revs climb to the 7,000rpm limiter, with pops and splutters from the exhaust as you lift off the throttle. It’s a much more charismatic engine than any of its competitors, including the Mercedes-AMG A45, and even trumps Audi’s bigger and more powerful 2.9-litre V6 found in the new RS 5 coupe.

A trick launch control setup is capable of slingshotting the RS 3 from 0-62mph in a claimed 4.1 seconds, and from the driver’s seat it feels every bit as fast as that figure suggests. The four-wheel drive quattro system hooks up to the tarmac and spits you down the road without a hint of tyre squeal. The Mercedes is only a fraction slower, though, covering the benchmark sprint in 4.2 seconds. 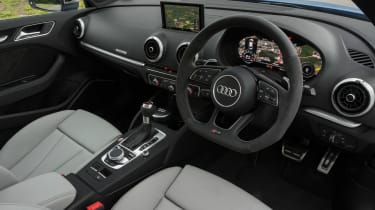 The RS 3’s 480Nm of torque is spread across a wide power band from 1,700rpm right up to almost 6,000rpm. Like most turbocharged performance engines there’s a whiff or turbo lag as the engines spools up, but beyond 2,500rpm the engine gets into its stride and pulls with real ferocity. The seven-speed dual clutch gearbox fires through the gears with accuracy and pace.

When you inevitably get to some corners the Sportback isn’t the inert and unresponsive hot hatch it once was. The steering feels immediately quicker and more responsive, instilling the car with a greater sense of agility. Combine that with the 26kg weight saving out of the engine and turn-in response appears much improved.

Audi has also tweaked the quattro four-wheel drive system so it now features a lightened multi-plate clutch, as well as torque-vectoring tech. It might not sound like a hugely significant change, but it allows faster distribution of the engine’s power to each wheel, while also enabling up to 100 per cent of the power to be sent to the rear axle.

On the road, the RS 3 still feels neutral and balanced, rather than adopting the rear-driven character like the Ford Focus RS. However, the huge amount of traction allows you to carry alarming speed through fast changes in direction with absolute confidence.

It rides 25mm lower to the ground than a standard A3 Sportback, and while the ride does have a firm edge to it it’s certainly not as uncomfortable as the Focus RS. And like most Audis today, everything inside looks, feels and even smells premium. The £45,000 price tag (or more than £55,000 if you add up the options on our test car) is steep, but you really can see where all of your money has gone. The beautiful leather sport seats are supportive but comfortable, while the Alcantara steering wheel feels like its been plucked out of a racing car.

Audi’s 12.3-inch Virtual Cockpit dials are included as standard, as are LED headlights, 19-inch alloy wheels, all-round parking sensors, seven-inch retractable display with sat-nav, dual-zone climate control and heated front seats. The 335-litre boot is also a decent size (if a little down on the standard A3), while two adults or three children will be more than comfortable in the back. 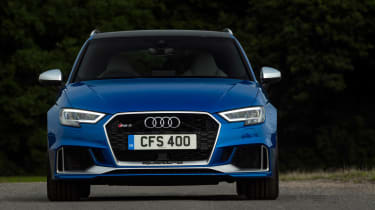 Click on the gallery above to see more of the Audi RS 3 Sportback...