Mercedes-AMG's mega new Audi RS3 rival hits British roads, but how does the A45 drive? 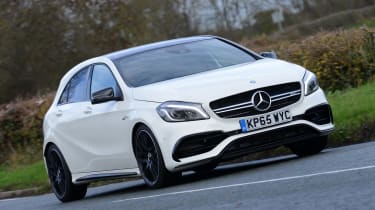 There’s no denying the revised AMG A 45 is more usable than its predecessor, but it still isn’t quite the driver’s car Mercedes claims it to be. The adaptive dampers make it easier to live with, while the headline figures still ensure this is officially the fastest hot hatchback on sale today. However, despite its all-weather grip and lightning fast responses, front-driven rivals are more fun, more of the time.

We’ve already driven high-power petrol and volume-selling diesel versions of the latest A-Class in the UK, but how does the flagship Mercedes-AMG A45 fare?

This super hatch has been considered fast but a little underwhelming up to now. While the four-wheel-drive system provided plenty of grip, some cheaper, slower, front-driven rivals, such as the SEAT Leon Cupra, offered more smiles per mile.

Clearly perturbed by the introduction of the new 362bhp Audi RS3, Mercedes’ engineers have tweaked the 2.0-litre turbo, which now gives an impressive 376bhp (up from 355bhp). This confirms the new A45’s place at the top of the performance tables and makes it the fastest accelerating hot hatch you can currently buy. 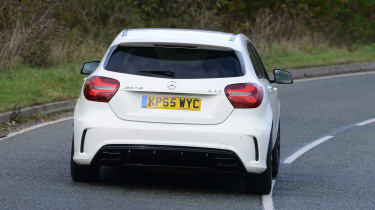 But there’s more to a car than headline-grabbing stats, and while the AMG boasts the most powerful production four-cylinder on sale, it also gets revised gear ratios, adaptive damping and aerodynamic tweaks.

The power boost has shaved 0.4 seconds off the car’s 0-62mph time, slashing it to just 4.2 seconds. Top speed is still pegged at 155mph, but if you regularly commute via the German Autobahn, you can remove the limiter, allowing the A45 to continue to accelerate all the way to 169mph.

To us, the biggest revelation is in the suspension and handling. While the old model was quite insufferable around town, the new £595 optional AMG Ride Control adaptive dampers transform the way the car drives. It allows owners to switch between Comfort and Sport modes, and while you can still feel every contour in the road in the softer setting, it’s more cushioned than before. Even Sport mode isn’t unbearable. 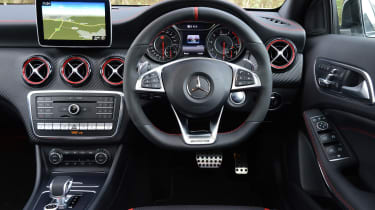 You can choose from a variety of drive set-ups as well, including Race, which gives a sportier setting to the traction control.

Elsewhere, the seven-speed DCT gearbox is as impressive as ever. While it’s smooth when doing day-to-day journeys, the more aggressive driving settings sharpen up changes and help the AMG fire away from junctions. Full throttle upshifts are also accompanied by a pleasing exhaust flutter.

Equipment is generous: all A45s come with LED headlamps, a reversing camera, eight-inch touchscreen sat-nav and AMG wheels as standard. But there’s no getting away from the near-£40,000 price tag.