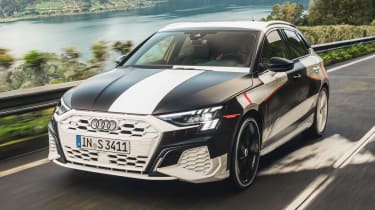 This first taste of the next A3 in sporty S3 form reveals that Audi’s engineers have followed one key mantra: if it ain’t broke, don’t fix it. It feels similar to drive to its predecessor, save for a bit of added refinement and the new sound actuator. As such, we anticipate those looking to upgrade into the new car from won’t find much reason to from behind the wheel.

The Audi A3 is possibly preparing for the fight of its life, as it enters its fourth generation and 24th year as one of the most important and best-selling models in Audi’s now expansive line-up.

That’s because C-segment family hatchbacks other than the salubrious Audi have been on a drive to become ever more premium in recent years. And with PCP deals making larger cars such as SUVs and executive saloons accessible to those who would typically dive into a car like the A3, this newcomer has to carve out a niche beyond just being a more upmarket alternative to its Volkswagen Golf sibling to stay with the times and continue being one Audi’s biggest success stories.

Auto Express has been to drive a late prototype and get a first taste of this all-important car for 2020. 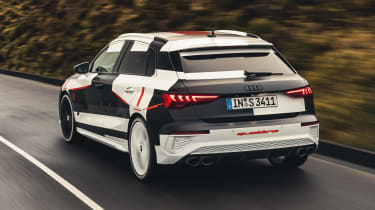 The Mk4 A3 is still based on the same MQB underpinnings as the Golf, but as ever, the chassis development has been done by Audi in Ingolstadt, and it’ll be presented as a more upmarket alternative to the admittedly plush Mk8 version of Volkswagen’s icon.

Following industry trends, three-door versions of the A3 will be discontinued. In fact, Audi stopped building the three-door variant of the previous A3 shortly after its facelift, and only 8,000 of the 313,000 A3s built across all body styles in 2017 were this variant, making it the least popular derivative with buyers. The Cabriolet variant is being ditched too.

Five-door Sportback cars will hit the market first, with a saloon variant to challenge the latest Mercedes A-Class Saloon due at a later date. 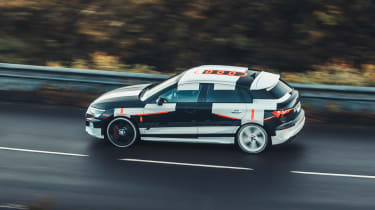 The prototype handed to us - a new S3 Sportback, which rivals the BMW M135i and the Mercedes-AMG A 35 - wears only thin exterior camouflage, and it’s easy to notice that the design team have opted for a mild evolution of what has gone before, save for some newer touches that are mirrored on cars like the A1 Sportback and Q3. The nose features the same three cuts just where the bonnet meets the new grille, while the headlights and tail-lights are more aggressive than before. But by and large, it looks remarkably similar to its predecessor.

We aren’t allowed to reveal the cabin just yet. But it’s a far more technologically advanced environment than the outgoer, in comparison with the conservative exterior redesign. The rear bench feels very comfortable and well padded, and space inside feels enhanced by the new environment Audi has created.

Get going in the new S3 and one of the first things you’ll notice - especially if you flick the car into Dynamic on the latest iteration of Audi’s Drive Select system - is the engine note. The S3 features a new sound actuator, sitting behind the dashboard and tasked with reverberating engine noise around the cabin.

While the S3 sticks with the 2.0-litre four-cylinder turbo petrol from the old car, it sounds totally different due to this new trick. Systems like these have received criticism in the past, but the S3’s new one is novel in execution because it doesn’t bolster the four-cylinder note. In fact, it changes it entirely, doing an uncanny impression of the bassy five-cylinder 2.5-litre engine we’ve become accustomed to in the RS3.

Power and performance stick right in the same ballpark as the last S3, so this is a potent hot hatch with a balance of power that feels right at home on the road. The DSG transmission still bears trademark kickdown lag you’ll find elsewhere in the Volkswagen Group, so from a powertrain perspective, the S3 really doesn’t change much. New engine technology is instead likely to be saved for the regular A3 line-up, which should get a selection of engines mirroring those of the Golf. As such, expect 48-volt mild-hybrid systems to be applied across three and four-cylinder options, along with a new plug-in hybrid.

With the S3 prototype, Audi has instead focused on the chassis and steering. Adaptive damping returns, while the latest version of the brand’s progressive electromechanical power steering arrives. The quattro all-wheel drive set-up can vary torque completely between front and rear axles, while the traction control system now brakes the front and rear wheels on the inside of corners in a bid to increase how tightly the car sticks to the inside line. 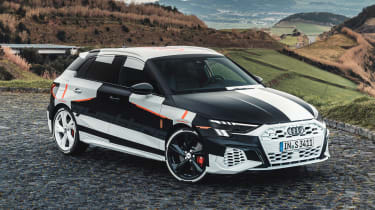 It’s good to drive in the sense of this being a car that’s incredibly easy to hustle along challenging roads, with immense levels of grip and incredibly direct steering. However, pleasingly accurate though it is, the steering feels like it’s still a little shortcoming in feel compared with what BMW offers in the 1 Series.

The characteristics of the various damper profiles really do tangibly change, though. There’s now a greater spread between the compliant set-up offered in Comfort and the assuring firmness sprung upon you when you venture into Dynamic. But by and large, the S3 looks set to remain positioned towards the firmer side of the family hatchback spectrum, irrespective of which mode you opt for. An Individual mode on the Drive Selector means the driver can pick and choose various settings across the engine map, steering, dampers and sound actuator, to create a custom-made setting.

Throw all of this together and what you get is something that, in all honesty, feels very similar to what we’ve known about the S3 for some time.

Testing the Audi S3 from an engineer’s perspective 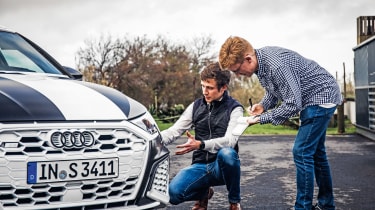 “In my opinion there are two very important new developments for the chassis of the new S3. There’s been a new approach. All the systems work together, and the new damping system with adaptive dampers gives the driver the opportunity to spread the properties of the car in a wider range than before,” says Gunnar Schultz, a member of a large team of development engineers who have been working on the new A3 and S3 for some time now.

Schultz tells us that the regular A3 is destined to take on some of the sporty characteristics shown here in the S3, but that more mainstream, everyday versions of this new hatchback, which we’ll see in March, will do this without ignoring comfort requirements.

“We differentiate the Audi cars from other MQB cars by having our own chassis application and steering application,” he says, “and developing our own tyres so the whole chassis is different.”

Schultz specifically tends to tyres, and has been working with industry suppliers to develop rubber especially for the S3.

“It means are able to meet the particular needs of the model,” he says. “To make it drive individually, to create a special character with the car.”