The new Audi S3 Cabriolet is fast and sharp to look at, but is it any fun to drive? 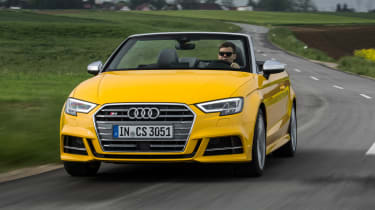 The Audi S3 Cabriolet fast, stylish and well-built, but it’s disappointingly dull to drive compared to its main rival, the BMW M235i. It feels heavy in corners and while the engine is powerful, it’s never that much fun. Treat the S3 as a quick cruiser and you won’t be disappointed, but a cheaper, lesser-powered model will do the job just as well.

Along with the tweaked A3 hatch, the Audi S3 range has been given a round mid-life updates – including the drop-top Cabriolet version you see here. Like its A3 siblings, the S3 gets new in-car tech and a fresher look, but it also benefits from a 10bhp power boost, bringing total output to a considerable 306bhp.

The 0-62mph sprint takes just 5.1 seconds - three tenths faster than before – thanks to Audi’s quattro four-wheel drive system and 400Nm of torque. It’s also down to Audi’s seven-speed S tronic automatic gearbox, which now has an extra gear.

The figures look good, but on the road the Audi just doesn’t feel as fast or exciting as rivals like the BMW M235i Convertible (soon to be renamed M240i). There’s loads of grip off the line, and the torquey turbocharged engine provides plenty of performance; but the S3 just isn’t very exciting to drive fast, even with the roof down.

The car feels built for boulevard cruising than twisty country roads. In-gear performance is strong, but rev the engine and you’ll find a lack of power at the top end, forcing frustrating short shifts. The sporty exhaust note sounds good when you’re pushing harder, but it’s boomy at constant speeds and only heightened with the roof lowered. 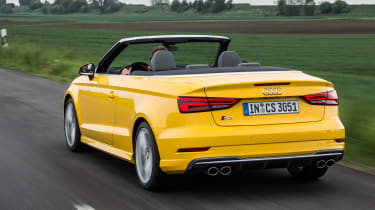 In the corners the S3 Cabriolet feels heavy, and starts to understeer a bit earlier than its hard-top siblings. That’s the only real difference, though, and the soft-top isn’t noticeably different to drive on the whole. Unfortunately, the S3 suffers from vague steering and a rather uninvolving driving experience, but there is loads of grip, letting you really power out of corners.

The sports suspension on our car felt reasonably smooth on German roads, but historically this option has been a bit too harsh for UK tarmac. Luckily you can delete it at no extra cost - and you won’t miss it, as the S3 isn’t good enough to drive to justify the harder ride. 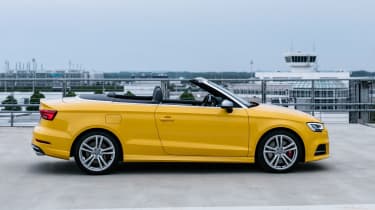 The visual changes are very subtle, but the wider grille and slimmer lights do give the S3 a more aggressive front-end. The styling didn’t really need to change much, however, as the S3 was already a handsome car with an understated sportiness to the design.

The interior isn’t too different either, but it does now benefit from Audi’s excellent (but optional) Virtual Cockpit display. This system puts all of the infotainment right in front of the driver, including the sat-nav, dials, media information and other settings. It’s a brilliant touch, meaning you never have to look over to the dash and away from the road. You can customise the way it all looks using buttons on the wheel. 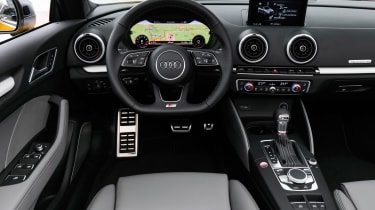 Along with the Virtual Cockpit, the classy design, well-placed controls and quality feel are one of the Audi’s strongest points. Apart from the boomy exhaust it’s quiet enough inside with the roof down, especially if you have the wind deflector fitted over the back seats. There’s a bit of buffeting without it, but that’s to be expected from a convertible.

Rear-seat passengers might have cause to complain, however, as there’s not much legroom back there. The boot is smaller than an equivalent saloon version too, making the Cabriolet the least practical model in the new A3/S3 range. But that comes as no surprise, and is one of the compromises you must accept if you want to feel the wind in your hair on sunny spring day.

There’s quite a bit of standard kit, including LED lights, 19-inch alloy wheels, sat-nav, a driving mode selector (that changes steering weight and the responsiveness of the powertrain), smartphone connectivity and a 10-speaker stereo.