BMW's open-topped M235i ticks all the compact sports convertible boxes, but at a price 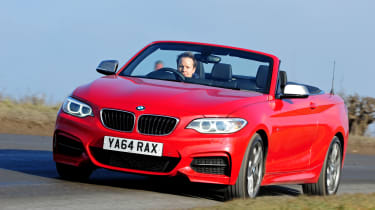 We all like the idea of a race car for the road, but how often would we really use it? The M235i addresses that by being just as stunning to look at, comfortable and beautifully-built as the rest of the range, but delivering a searing turn of pace, stirring soundtrack and fun handling when the moment takes you. It’s not cheap, and the back seats and boot are cramped, but spec your car wisely and you won’t be disappointed.

We’ve already raved about the beauty of the new 2 Series Convertible, following our first opportunity to drive the 228i in Austin, Texas. If you put performance ahead of looking pretty, though, then the M235i Convertible should be even more up your street. It’s the first drop-top ever to wear the M Performance badge (a half-way house between standard BMWs and full-fat M cars) and we’ve driven it on UK roads.

The raw numbers stack up well against the competition, especially the 321bhp 3.0-litre twin-scroll turbo six-cylinder engine that has 25bhp and two-cylinders more than its closest rival – the Audi S3 Cabriolet. The Audi has four-wheel drive but the rear-wheel drive BMW covers the 0-62mph sprint 0.4 seconds faster in 5.0 seconds flat. The Audi does, however, trump it on fuel economy and CO2 emissions by 4mpg and 20g/km. 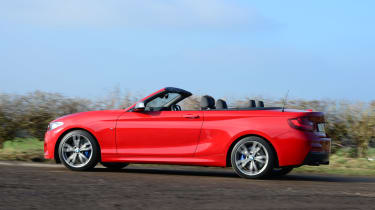 Weighing around 150kg more than the M235i Coupe, the Convertible takes 0.2 seconds longer to get from 0-62mph. It’s an acceptable compromise, though, because the mass is used to sure-up the chassis and keeps it wobble-free except over the most scarred surfaces. The roof mechanism, which takes a slightly laboured 20 seconds to retract, is also expertly made and cocoons you from wind and tyre noise on the move brilliantly – far better in fact that the new Audi TT Roadster’s roof can manage.

Drop the roof – finished in a fetching optional Anthracite Silver fleck colour (£105) on our test car – wind down the windows and, if you can put up with the wind whipping around your head, then the M235i starts to come alive. Find the right road and hearing this engine spin all the way to over 7,000rpm is a spine-tingling experience. 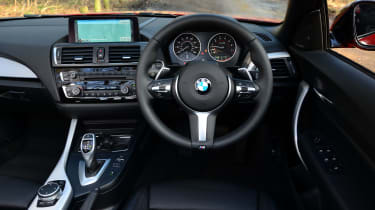 While there’s plenty of torque low down for either cruising in a high gear or short-shifting and punching out of bends, the real thrills come from holding onto the ratios until you headbutt the limiter. The engine note takes on a savage, harder-edge past 5,000rpm and the engine kicks hard, reminding you of naturally-aspirated ‘M’ engines of old. There is a performance penalty compared to the Coupe, but with the roof down you’re so immersed in the experienced that you’re unlikely to notice the difference.

Our test car came with an eight-speed automatic gearbox – a £1,685 option – and it’s hard to fault. Although it’s a torque converter rather than a twin-clutch unit, it feels just as fast as a twin-clutch when you flick between the gears in manual mode, and much smoother than one in Auto mode. This dual character is evident in the suspension, too: The M235i comes with firmer M Sport suspension as standard, but it’s not nearly as hard as you might think. In fact, there’s even some body roll as the car settles on its springs in the corners. 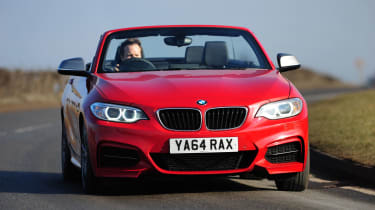 We’d recommend spending £515 on the adaptive M Sport suspension that firms up and slackens off as you toggle through the various driving modes, from Eco Pro to Sport+. In its softest setting bumps are nicely muffled, while in its raciest mode you can attack corners, put the traction control in its intermediate setting or off altogether, and enjoy the rear sliding around underneath you. In other words, it allows the M235i to perfectly fulfil its brief as a performance car built with everyday road driving in mind.

The drawback is the £37,710 price tag, because while that includes 18-inch wheels, silver mirrors, M Sport suspension, M Sport brakes, a rear spoiler an M logos on the wings (over and above the M Sport spec), there are still plenty of options worth having.

Our test car came in at an eye-watering £45,820, and while you don’t need to go quite that mad, and could save a fair amount by sticking with the excellent six-speed manual gearbox, we’d definitely recommend things like the adaptive suspension and heated seats (£295) as must-have items.