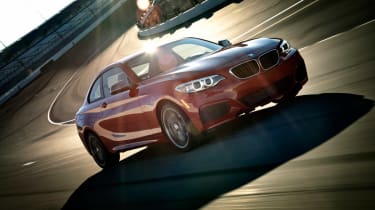 The BMW M235i is a few thousand pounds pricier than an M135i hatch, but has more power. Plus, it’s ultra-refined one minute, then a playful performance car the next. Cheaper and more efficient versions are available, but for pure driving thrills the M235i is every inch the junior M car.

BMW has decided to introduce its all-new 2 Series Coupe with a bang. Rather than handing us the keys to a big-selling 220d, it’s chosen the 322bhp top-spec M235i. This is designated as an M Performance car rather than a full-on M model, so think of it as a more accessible younger brother to the new M4 Coupé – although it was developed by the same sub-division of BMW.

The newcomer replaces the BMW 1 Series Coupe, and while it’s very similar in profile and concept, it’s much bigger. It’s 72mm longer overall (with 30mm of that in the wheelbase, liberating more rear legroom) and 32mm wider. In a bid to enhance the car’s stance and handling, the front and rear tracks are increased by 41mm and 43mm respectively, with the rear axle the widest point of the car.

The M235i also has its own M Sport styling package, including deeply sculpted and vented front and rear bumpers, grey 18-inch alloys and M Sport brakes.

Inside are unique sill plates and instruments, plus a gorgeous three-spoke leather steering wheel. All models serve up a little more headroom than a 1 Series Coupe, plus the boot grows by 20 litres to 390 litres, and can be accessed by folding the rear seat.

Press the engine start button, and the turbocharged six-cylinder comes to life with a flare of revs. It immediately settles to a near-silent idle, and when driven gently it purrs away. Settle into a motorway cruise and wind and road noise are minimal, too. But while the M235i can comfortably cover long distances, it also has plenty to keep the more enthusiastic driver interested.

It’s best experienced in Sport or Sport Plus mode, where the steering assistance is reduced and feedback improved. Throttle response sharpens significantly, too, making it feel truly alive.

On models with the £1,685 optional eight-speed automatic box, Sport and Sport Plus modes also alter the shift pattern. Plus, drivers can switch the auto into an additional ‘Sport’ programme and take control via steering wheel-mounted shift paddles.

No matter how you use it, this box is highly responsive, and takes nothing away from the car’s driver appeal. It’s just that, for us, the standard six-speed manual suits the car’s aggressive character better. 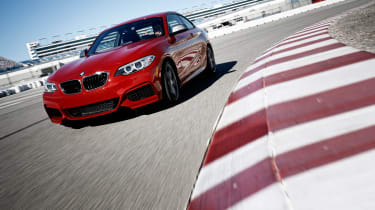 Whether you go for the manual or auto, the M235i feels at home when attacking a series of tight bends and fast sweepers. In the dry at least, there’s an astounding amount of grip available, allowing the driver to confidently turn into the apex of a corner and ease the power back without sliding around.

Even with the DSC stability control system disabled fully, it takes considerable provocation to unstick the rear tyres. BMW says this security and inherent stability is part and parcel of an M Performance model, even if the M235i is the most powerful version released to date.

The headline figure is a maximum output of 322bhp, although as that’s produced at high revs, what matters more to everyday driving is the mid-range torque – and it doesn’t disappoint. Drivers can chase the red line if they wish, but there’s no need to make absurdly swift progress.

So while the M235i will make up only a small percentage of the 5,000 or so 2 Series Coupes the brand expects to sell annually, it’s a brilliant halo model for the new range. And it proves that nobody does tactile rear-wheel-drive sports cars quite like BMW.

Still, if you want the looks without the fuel bills – and fancy a bit of a saving on the price – a twin-turbo 225d M Sport Coupe will follow soon after the M235i launches. The only other petrol model confirmed for the UK is the 181bhp four-cylinder 220i turbo.