For a company that makes so much of its engineering skills, Audi's approach to the science of car building is not as straightforward as you might imagine. Take the S4 Avant as an example. Marketed as a high-performance compact executive estate, it aims to leave rivals behind with its vast 4.2-litre V8 engine. 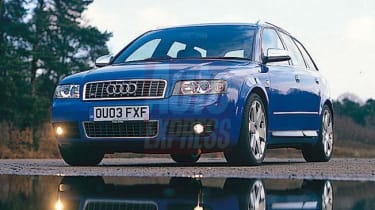 Despite having all the ingredients of a first-class performance car, the S4 fails to deliver thanks to its uncompromising ride and rough throttle response. GT fans could also feel short-changed by the dismal economy. The Audi hasn't been fully developed, which is a pity, as it shows real promise.

For a company that makes so much of its engineering skills, Audi's approach to the science of car building is not as straightforward as you might imagine. Take the S4 Avant as an example. Marketed as a high-performance compact executive estate, it aims to leave rivals behind with its vast 4.2-litre V8 engine.

On paper, the £37,355 package sounds promising. Even if you ignore the basic mathematical fact that eight shouldn't go into four, the Avant is competitively priced against rivals such as the £44,445 Mercedes AMG C32 and Volvo's larger V70R, which is £37,678.

The Audi also promises a healthy 339bhp from its eight-cylinder engine - which is currently unique to the class - plus all-wheel drive, sporting design and a huge, practical luggage area. It was hard not to be impressed when we first saw our car. With its 18-inch alloy wheels, aluminium-finished mirrors and blue paintwork, it instantly set itself apart from the standard A4.

When you fire up the big engine, it spins eagerly into life, before settling to a gruff idle. From tickover, the V8 powerplant does not feel particularly responsive - but then, with a massive 410Nm of torque available from only 2,500rpm, it doesn't need to rev like a Formula One racing car.

However, any early promise begins to melt away as soon as you slot the transmission into gear. The six-speed manual box (a Tiptronic automatic is available as a £1,000 optional extra) feels notchy and imprecise, while the fierce bite of the clutch pedal makes smooth changes difficult to achieve.

And there is much worse to come. The ride is incredibly harsh, while at higher revs the throttle lacks progression. Even more worryingly, fuel economy on our varied route barely rose above 17mpg. In short, the Audi feels a little disappointing, particularly when there are so many other areas that impress. The quattro all-wheel-drive system provides masses of traction and, as is to be expected, the V8 engine gives huge performance.

The steering is nicely weighted and very accurate, while the brakes are powerful. At high speed on smooth motorways, the car also feels relatively refined. The choppy ride is less of an issue here, and the thick glass all but eliminates road and wind noise.

Ultimately, though, the S4 Avant is too expensive when you take into account the numerous shortcomings of the driving experience. The idea of a high-performance, V8-engined compact executive estate is bound to appeal to sports car enthusiasts, but sadly the reality is likely to disappoint.