Race to the top: Audi TT vs Peugeot RCZ

Can latest Audi TT hit the same heights as its big-selling predecessors? We find out as it takes on the Peugeot RCZ 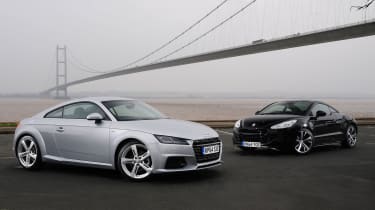 Brits have a certain love affair with the Audi TT, as there are more purchased here than in any other country. So, driving the all-new third-generation model on UK roads for the first time is big news.

The latest TT retains its Audi Space Frame aluminium and steel hybrid construction, but it’s based on the VW Group’s MQB platform, so is lighter, more efficient and faster, plus promises to be more fun than ever.

Initially, the newcomer will be offered in Sport, S line and TTS trims, with either 2.0-litre TFSI petrol or efficient TDI Ultra diesel power. And as ever, there will be the option of Audi’s grippy quattro all-wheel-drive transmission. However, it’s the front-wheel-drive six-speed manual 227bhp petrol car that’s expected to be the biggest seller.

With tauter looks and an even more upmarket cabin, the TT arrives in UK showrooms in December, but now the order books are open, we’ve put the 2.0-litre TFSI S line head-to-head with the cheaper and better-equipped Peugeot RCZ THP 200 GT. Is the TT’s higher price a bridge too far, or is this one of the most desirable and best-value coupes around?

Read full reviews of the cars by following the links above, and scroll down to find out the verdict of this twin test! 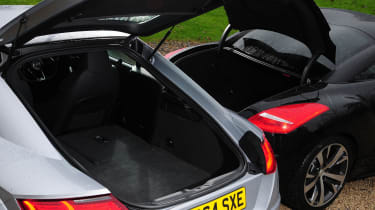 The rear seats in these cars are only for occasional use, but the RCZ’s are tighter. It also provides a 309-litre capacity in its wide, long boot, and while both of these coupes have split-fold rear seats, practicality in the RCZ is limited by the restricted height under the fixed rear windscreen. The Audi’s hatchback tailgate makes it easier to load large items and the boot is deeper than the Peugeot’s. Both cars come with tyre repair kits. 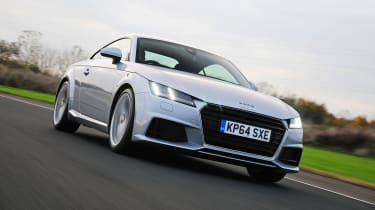 With an extra 27bhp, plus 95Nm of additional torque, the TT was 1.1 seconds quicker from 0-60mph than the RCZ. It helps that the new car is 91kg lighter. But relatively long gearing – the Audi does more than 70mph in second – means the margins are smaller when it comes to in-gear response. 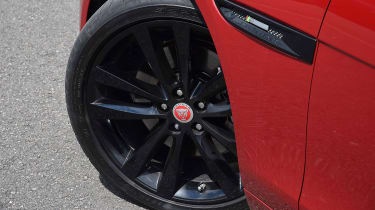 Few small coupes turn heads as much as the RCZ. Launched in 2009 and facelifted in 2013, its concept car looks have aged well and it’s become the most desirable Peugeot in a generation. It has the style to rival the TT, but for some buyers, the Audi badge alone will be worth the price premium. 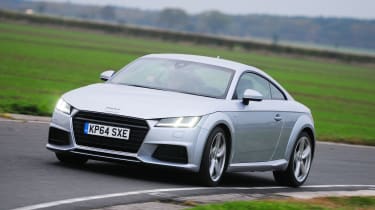 The TT is back to its very best. The quality, design and detailing of the cabin are stunning, while the car is more efficient, faster, lighter and better to drive than ever before. The Virtual Cockpit is superb, with the only small niggles being a slightly high list price and S line suspension being a little firm. The new TT is an absolute delight to be in and drive. A simply fantastic, class-leading coupe, it sets new standards. 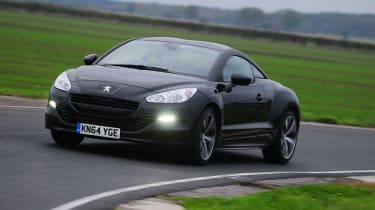 It’s still a great-looking and attractively priced coupe, but the RCZ is left trailing in the wake of the brilliant new TT. The cabin feels cheap and outdated by comparison, while the Peugeot lacks the finesse of the Audi’s chassis and can’t match its rival’s firepower. And although the RCZ is cheaper to buy, it’s not as attractive an ownership proposition as the TT due to its higher CO2 emissions and worse residuals.