The Flying Spur's W12 engine is great and the cabin beautifully trimmed - but VW-sourced parts let things down slightly. 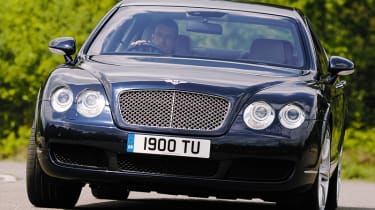 Driving: The Bentley is a relaxing chauffeur vehicle. While our test car's 20-inch rims meant some suspension crash and steering kickback over really poor surfaces, the ride is very accomplished. It's not as composed as the latest Mercedes S-Class, but given its size and weight the car can be pushed hard in corners. It's a little nose-heavy, and there's a bit too much body movement, yet it still feels well controlled. The four-wheel drive ensures superb traction, and with the VW-sourced W12 delivering a wave of thrust from as low as 1,600rpm, the Bentley is a strong performer - especially given its 2,475kg kerbweight. 60mph arrives in a scant 5.2 seconds and the top speed is 195mph.

Marketplace: Few automotive brands carry the kudos and history of Bentley, though the maker has changed dramatically over the past few years. Now, you are just as likely to see a Bentley in a rap video as you are at a country club. Based on a stretched version of the Continental GT platform, the Flying Spur takes its name from a 1957 model. A twin-turbo 6.0-litre W12 ensures the Bentley has remarkable reserves of power - 552bhp - but buyers certainly pay for it: nearly £120,000. But it's not without rival, for Mercedes offers an S-Class that's almost as expensive, and very nearly as powerful too. A little less extreme, relatively, is the Lamborghini V10-engined Audi S8, while BMW's M5 may be smaller and cheaper than the Bentley, but it's also faster for those who want the ultimate performance four-door saloon.

Owning: Sharing the Continental GT's styling, the enormous Flying Spur has real road presence, aided by classic touches such as the silver grille. And the special feel continues inside. It takes 11 complete hides to upholster the cabin, while the burr walnut trim around the dash and doors provides further opulence. Parent firm Volkswagen's influence can be seen in the faultless build, although less welcome is some of the German firm's switchgear on display. Still, most of the metal knobs have a unique-to-Bentley metal finish, so this isn't much of an issue. In fact, the biggest problem with the VW-sourced parts is that they are dated, and simply not as clever as those in key rivals. The sat nav system, for example, is old fashioned, while the centre console screen is plain dated. The parking sensors just bleep, and there's no screen to show whether it's the front or rear sensors that are working. The Bentley lacks reach adjustment on the steering too, although the seats are very comfortable. Rear passengers fare well as there is masses of legroom. Mind you, it's expensive to run. You don't buy a 500bhp-plus saloon if you're concerned about fuel returns - we averaged just 15.6mpg, while bespoke the servicing may be, but hugely expensive it is too. At least retained values will be competitive, due to the car's exclusivity.