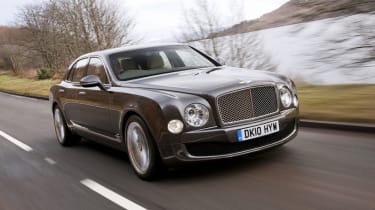 “Engineering and developing a new Bentley flagship is a once in a lifetime opportunity.” So says Bentley chief Franz-Josef Paefgen. And it’s an opportunity the firm has seized with both hands. The car is beautifully constructed, and offers a brilliantly capable chassis. Supremely comfortable yet still utterly engaging to drive the flagship model has a magical quality to its character that seems to suggest we will still be talking about this Bentley built Bentley 80 years from now – just like the last one. Let’s hope the firm won’t take quite as long to get round to doing this again!

From its huge front headlamps to the massive 21 inch wheels crammed into the wheelarches, everything about Bentley’s new Mulsanne is big…

From nose to tail, the £220,000 machine is a shade over 5.5 meters long. It weighs 2,585kgs and its powered by a twin-turbocharged V8 engine that generates a staggering 1,020Nm of torque - delivered to the road through an eight-speed gearbox.

Buyers can choose from 100 different paint colours for the bodywork, and nine different types of leather and nine wood trims, all of which can be enhanced with custom stitching, inlays and marquetry.

There’s a 2,200 watt Naim stereo system, connected to a 60GB hard drive and a new satellite navigation system, both of which are carefully integrated into the traditional wooden dash. In the back, drivers get electrically adjustable seats, independent air-conditioning and the options of console tables, window blinds and television screens.

But there’s much more to the Mulsanne than the epic options list. It’s important to remember that as well as being physically big – the newcomer is a huge car for Bentley in every sense.

After all, this is the first all-new, independently engineered and developed Bentley for 80 years, a significant milestone in itself. The car it replaces – the Arnage – had its roots in the history of Rolls Royce, and the development of the Silver Seraph.

While it’s still true that this car has been developed with input and parts from Bentley’s owners, the Volkswagen Group, there’s a real feeling independence that lurks in the car. You can put that down to the fact that while it’s easy for VW to share components like switches, the 15 hours it takes to hand stitch this car’s steering wheel is something that belongs to the Crewe company alone.

But the big question is, what is the car like to drive?

In a word, it’s unique. No other car blends the Mulsanne’s extreme comfort with such agility and steering accuracy. Whether you are driving, or travelling in the back, motorway cruising speeds barely register for things like road and wind noise.

But what’s really amazing, is that if you turn off the main road, onto a winding stretch of tarmac, you can maintain the same pace without losing any of the car’s comfort or refinement.

Power delivery is absolutely seamless, and with maximum torque available from just 1,750rpm there’s no noticeable crescendo of power, just a flat wall of thrust delivered right the way through to 4,500rpm.

Gear shifts from the auto box are almost imperceptible, and perfectly timed. Though drivers can choose ratios with two knurled aluminium paddles located behind the wheel it’s not something you feel you need to do to extract more speed from the car.

It has to be said, however, that steering and brake feel are limited, and we found the gearbox selector system a little confusing at times, particularly when going from forward to reverse.

More impressive is this car’s fuel economy – which according to our tests is a real world 16mpg. Not much, but not bad in a car of this type.

New fuel systems, which switch of four of the engine’s eight cylinders at cruising speeds offer a useful extension to the range.

But the final question – and perhaps the biggest - concerns this car’s success. Bentley is piecing itself back together after a bruising 18 months. The current credit crisis may be easing – but the firm hints that times are still tough. Nevertheless, the firm is on track to deliver 800 Mulsanne’s in 2011 – close to the firm’s maximum capacity, and is all sold out for the remainder of 2010.

Rival: Rolls Royce Phantom More expensive as standard than the Bentley, and even bigger. However it cannot match the Bentley’s staggering power output, or the car’s incredible attention to detail.