Bentley say the updated Mulsanne Speed is best enjoyed from the front, but the flagship luxury limousine simply can't hide its size 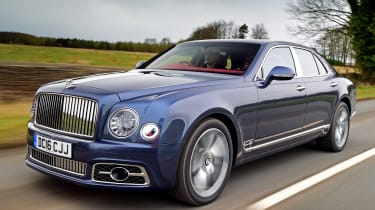 The Bentley Mulsanne remains the ultimate statement of opulence, luxury and wealth. A range of mid-life tweaks does nothing to dent this appeal, and it’s hard not to be won over by the Mulsanne’s sheer presence and daunting footprint. It feels huge on UK roads, and despite this Speed model being the ‘driver’s choice’, cars like the far cheaper Porsche Panamera have it licked when it comes to front seat appeal. This, like all Mulsannes, is best enjoyed from the back.

The Mulsanne is Bentley’s flagship limousine. Sitting above the Flying Spur, as such, it’s a car often enjoyed from the rear seats. A light facelift in 2016 saw designers and engineers apply a selection of tweaks inside and out, while also adding an even more opulent Extended Wheelbase model to the range.

At more than 5.5m long, however, the standard Mulsanne offers more than enough space in the back for even lanky-legged business bosses – with room for them to work, rest or play as they see fit. The Muslsanne Speed is an altogether different beast, though. Despite sitting on the same footprint, it’s a car best enjoyed from the front, says Bentley. 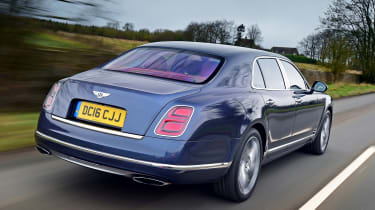 It’s this car we’re driving on UK roads for the first time. The Speed gets all the same nips and tucks as the standard car, including the revised front end and floating LED lights, a wider grille and new bumper. At the rear, there’s a set of tweaked tail-lamps with bold ‘B’ signature, while at each corner there’s a set of new 21-inch alloy wheels exclusive to the Speed.

Inside, the sumptuous leather seats are now available in two styles and 24 different colours. Our car came finished in Fireglow red – a deep, rich hue that covers every piece of exposed trim as far as the eye can see. It won’t be to all tastes, but it certainly makes a statement.

The aviation-style dials remain, though Bentley has added a small colour screen between the speedometer and rev counter to allow the driver to display navigation mapping, infotainment, vehicle and trip information. It’s clear and crisp – and while those inverted dials take some getting used to, the supplementary screen is a great touch. 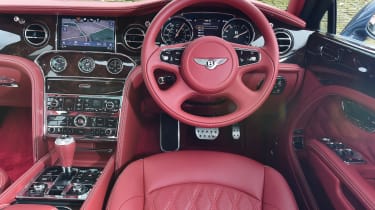 Of course, with Bentley’s Mulliner department offering buyers a seemingly endless list of options, buyers can customise their Mulsanne to their heart’s content. Our car came with the £14,890 Entertainment Specification, including iPad picnic tables with rear-seat screens, a Naim stereo and WiFi hotspot. The refrigerated bottle cooler with bespoke tumblers is an eye-watering £8,225, while carbon ceramic brakes are a further £13,000.

Everything is finished with the utmost attention to detail, though, with the new Mulsanne feeling a step above anything else from the British brand – including the new Bentayga SUV. The knurled metal buttons and switches add a desirable weight to the controls, while the leather covered dash and veneered doors offer a sense of prestige missing on lesser rivals.

Also new is the eight-inch touchscreen display, which now includes Apple CarPlay as standard. It’s quick and responsive to use, but the deep and extensive sub-menus can get confusing – especially on the move. The hidden USB port in the damped drawer above the climate controls is discreet but badly placed and a faff to get to in a hurry.

On the road, the Mulsanne Speed feels like a rocket ship. Despite its 1,100Nm of torque, it refuses to pin you back in your seat. Instead, it builds speed at a graceful yet alarming rate – passing the national speed limit in the blink of an eye. The 0-62mph dash takes just 4.9 seconds and it’ll hit quickly hit 190mph on a stretch of deserted German autobahn. 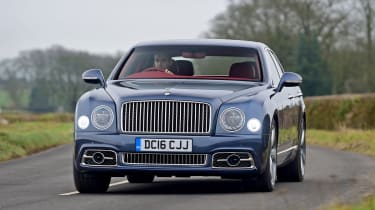 However, despite the fact that this is supposed to be the ‘driver’s Mulsanne’, the Speed can’t hide its size – or indeed its 2,685kg kerbweight. Rarely does it feel designed to fit on UK roads, and only on empty motorways do you feel truly at ease. It’s here that the limousine is most at home, pulling a whisper quiet 1,500rpm at 70mph. Refinement is truly excellent, matched only by the similarly priced Rolls-Royce Ghost.

Switch things to Sport mode and the Speed stiffens up and hunkers to the road. The body will still roll, but the gearbox shifts sweetly – and if you keep the car in its raciest settings it’ll maintain revs above 2,000rpm for instant throttle response. No matter which mode you select, though, the Mulsanne keeps a beautiful balance between composure and comfort.

That gargantuan bulk results in frankly appalling fuel economy and sky-high CO2 emissions – not that anyone in the market for a £250k limousine will be too concerned with running costs. That said, on a longer high-speed run, we managed a trip-readout of 21.5mpg, an impressive 15 per cent better than Bentley’s claimed figure.