With the Rolls-Royce Phantom taking its final bow soon, does Bentley's facelifted Mulsanne have what it takes to fill the gap? 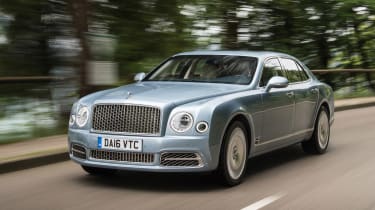 However much technology you cram into your Teutonic saloon car, it’ll never quite match the grandeur of a hand-built, leather-lined titan like the latest Bentley Mulsanne. The company’s detail improvements have made it more cosseting and civilised than ever, but it’s still that Herculean V8 that defines proceedings. Thirsty it may be, but it remains one of the world’s greatest engines.

Wolfgang Durheimer, Bentley’s president and CEO, had a few words of thanks for Rolls-Royce on the launch of the new Mulsanne. With the Goodwood-based marque discontinuing production of the current Phantom this year, Bentley will, for a time, have the global ultra-luxury saloon market all to itself.

That's not to say that the Bentley Mulsanne is a poor substitute to the Rolls-Royce Phantom. In fact, this revised version is even more of a rival for the best that Rolls has to offer. 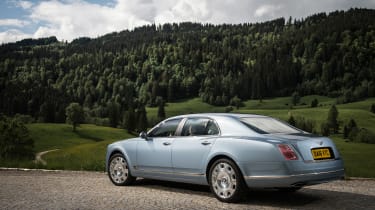 You might not find it too easy to see exactly what Bentley has changed on this latest car, as the interior and exterior look very similar to the previous model. Stare hard enough, though, and you can see tweaks to the front grille, which now uses vertical vanes, as well as new LED headlights and sharper lines throughout.

Round headlamps are still present and correct, while the outer lamps have now been brought in line with the central beams. Throughout its considerable length the Mulsanne’s lines are crisper than before, and the newly-added Extended Wheelbase model (a full 250mm longer) gets its own sculpted rear haunches to differentiate it from the regular Mulsanne. 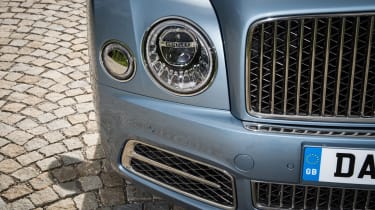 Cabin design is restrained but undeniably luxurious and beautifully constructed – there’s wood and leather wherever you look, with carbon fibre inlays available on Speed models. A completely new infotainment system brings Bentley’s grandest model technologically up to date with an eight-inch display and 60GB hard drive.

Those committing themselves to travelling in the rear will also find plenty to satisfy, particularly in longer the Mulsanne Extended Wheelbase. That car features standard curtains that can be closed to prying eyes, and both rear seats feature recline and massage functions. There’s a champagne glass cabinet too, and each rear passenger gets a staggeringly complicated folding table arrangement and individual infotainment screens.

It’s those in the front who’ll enjoy the greatest entertainment though, courtesy of the latest version of Bentley’s venerable 6.75-litre V8. In standard form the twin-turbocharged unit (which now features cylinder deactivation to bring combined consumption down to 19.3mpg) develops 505bhp and a walloping 1020Nm of torque – enough to reach 62mph in 5.3sec and top 184mph. 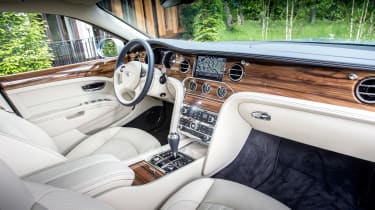 The Mulsanne Speed is even quicker, thanks to a 530bhp peak power output and a scarcely-believable 1100Nm of torque. Both thunder down the road with the slightest pressure on the accelerator, and you’d need to be in a serious hurry to trouble the second half of the pedal’s travel. The seemingly endless urge available from little more than tickover is a defining characteristic of the car and utterly addictive to experience.

At the same time, it’s whisper quiet unless fully roused, thanks in part to vibration-reducing active engine mounts. Like noise-cancelling headphones, they use an out-of-phase signal to neutralise undesirable tremors from the huge V8 – and Bentley says they can cut noise by as much as 15dB. 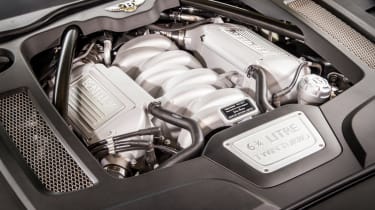 The ride quality is wonderfully controlled, insulating you from the road surface in a way few other cars can match. The steering isolates you from the asphalt too, which might be undesirable anywhere else but perfectly matches the silken feeling of the Mulsanne’s other controls. This isn’t a car for fast cornering – it’s too heavy for that – but high levels of grip and that mighty engine mean it’s still possible to cover ground at quite a lick.

Resist the options list and Bentley’s latest Mulsanne will set you back £229,360, while the Mulsanne Speed begins at £252,000. Few will pay that of course, not least because Bentley’s Mulliner coachbuilding division can personalise it to one’s every whim.