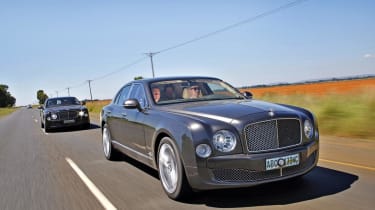 We’re travelling serenely down a dual carriageway, listening carefully for any rattles or squeaks from the car. There’s a faint hiss from the tyres touching the tarmac, a little wind noise coming from the wing mirrors, but that’s all. My chauffeur for the day looks over his shoulder: “Feeling comfortable?”

The driver is none other than Dr Ulrich Eichorn, Bentley’s engineering chief and the man behind the MkI Ford Focus and MkV VW Golf. Reclining in the sumptuous rear seats I stretch my legs out and watch some TV, while the South African landscape flies past the window. It’s an even more stunning sight that catches the eye though, the speedometer is registering 180mph, while the tachometer is settled at an unstrained 4,200rpm.

“Don’t worry, we have a special government-approved high-speed testing permit on the rear bumper – we’re allowed to drive at these speeds,” Eichorn assures me.

Auto Express has joined forces with a team of Bentley’s top engineers on the final hot-weather test drive for the Mulsanne, the first all-new saloon to be built in Crewe for decades, before it goes on sale this summer. While the finished product might spend its life wafting from the owner’s gated mansion to their country retreat, the Mulsanne is put through one of the most rigorous development programs of any car on sale, and we are here to experience these final prototypes under the microscope.

The venue for our road trip is the area surrounding the city of Kimberly, in South Africa. Kimberly was the codename for the Mulsanne during early development - a naming system Bentley employs on all new models, which is why Havanna was used for the Brooklands and Victoria for the Continental Supersports.

As this is the final test before the car comes to market, the devil is in the detail. There’s no time for suspension overhauls or engine rebuilding at this stage, but every fault has to be ironed out and every attribute fine tuned to Bentley’s sky-high standards. The team of engineers come armed with a checklist and begin ticking off each item, one by one.

The first area to go under the microscope is the in-gear performance. And acceleration in sixth, seventh and eigth gear is deemed to be not linear enough - something that will be addressed when the car returns to Crewe.

Next up is the smoothness of the heavily revised 505bhp twin-turbo 6.75-litre V8 -  a vital characteristic for a genuine Bentley driving experience. Because not all cars will be filled with premium unleaded, the engine’s silky torque delivery needs to be maintained even with low-grade fuel in the tank and at 1,000m above sea-level - where the air is much thinner.

The pre-production Mulsanne passes this test with flying colours. Quality sensors in the engine recognise air and petrol quality and automatically switch into a different mode with adjusted ignition points. And that’s not the only piece of trickery this engine has up its sleeve.

Up to speeds of 74mph on light throttle loads the ECU shuts off four of the eight cylinders in a bid to save fuel - Bentley claim economy improvements of around 15 per cent over the outgoing Arnage. The key here is to make the shut-down and start-up process undetectable from inside the cabin, and that’s exactly what it achieves throughout the test run.

The ZF-developed eight-speed automatic gearbox sails through its assement, proving to be fast and super-smooth, while the tyre pressure monitoring fares just as well in the searing heat of South Africa as it did during the cold-weather testing in the Arctic.

An advanced air suspension system provides the car’s pillowy ride and benefits from three settings that allow the driver to tailor the Mulsanne’s behaviour - Sport, Comfort and B. B stands for the mode recommended by Bentley, the perfect compromise between handling and comfort.

When it comes to the springs and dampers Dr Eichorn keeps his comments concise. He’s worried that in Sport mode, when the car’s travelling at over 125mph, the front feel a touch too firm - an example of his eye for detail. He confirms his suspicions with series of soft slaloms and earmarks the ‘fault’ for tweaking back at the factory.

A notorious trait of the outgoing Arnage was the tendency for its front end to lift up at high speeds, but the two-metre long bonnet of the Mulsanne side steps this unwanted pitching movement neatly. Above 135mph the front end lowers by itself by five millimetres to reduce the amount of lift. Drop below this speed and it rises back to the original position within ten seconds.

As the evening draws in and we park the cars up for the night, but an engineer’s work is never over. Each one of the seven-man team has to fill out a ‘Driving Appraisal’ form with their thoughts and suggestions. Every night these are sent back to the factory in Crewe to be digested.

In just one day we’ve covered 330km and assesed everything from the engine and suspension to the cupholders and seat ventilation. A gathering of Bentley’s most talented engineers have run a fine toothcomb over apair of near-production cars and the only faults they could find require nothing more than a quick fix. From where we’re sitting, the Mulsanne is ready to roll.