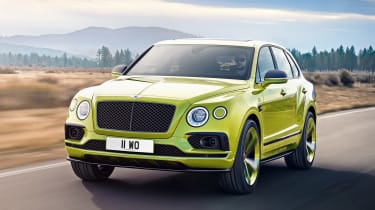 This is the Bentley Bentayga Pikes Peak Limited Edition: a special which marks the SUV’s record-breaking run on the gruelling Colorado mountain route.

Limited to just 10 cars, the Pikes Peak gets a cosmetic package which mimics the car which broke the record. Most notable is the “Radium” paint finish - a more subdued black is also available - and 22-inch alloy wheels which feature highlights in the same lurid shade. The Pikes Peak ditches the regular Bentayga’s brightwork in favour of black trim. An additional carbon fibre package adds a front splitter, side skirts and a rear diffuser and spoiler in the lightweight material. The exterior changes are rounded off by subtle Pikes Peak badging on the front wings.

Inside, the Pikes Peak’s black theme features more bright green highlights, appearing on the door and dash trims, the seat stitching and floor mat piping. The steering wheel is trimmed in alcantara, while the same material is used for the door and seat inserts. The dash features carbon fibre inserts, which are completed with a Pikes Peak logo. 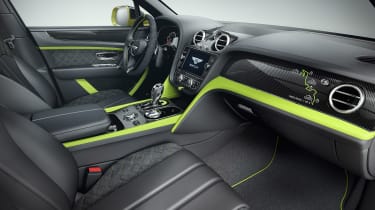 The Pikes Peak is powered by a 6.0-litre W12 petrol engine. The twin turbo unit produces 600bhp and 900nm, sending drive to all four wheels through an eight-speed automatic gearbox.

Other extras fitted as standard to the Pikes Peak include a sports exhaust and the Touring Specification, which features adaptive cruise control, a head-up display, lane-keeping assist and a night vision camera.

The car used on the run featured one or two modifications to prepare it for the run. The front seats were replaced with racing items, while the rears were removed to make way for a roll cage. An Akrapovic exhaust and uprated Pirelli Tyres round off the changes.

Do you like the look of the Bentley Bentayga Pikes Peak Limited Edition? Let us know below...