Bentley's first SUV, the Bentayga, made waves at the 2015 Frankfurt show in production form. Here's all you need to know.

You either love them or hate them, but Bentley has entered the SUV market with the luxurious Bentayga. First revealed at this year's Frankfurt Motor Show, it'll arrive in 2016 priced from £160,000.

The British firm's first SUV didn't get off to the greatest start. The more premium Range Rover rival was shown off by the EXP 9 F concept at the Geneva Motor Show back in 2012, and that showed there was a huge interest in a car of the type. Under one condition - it didn't look like this ungainly concept.

When the Bentayga name first came out it wasn’t received with universal praise either, although Bentley’s sales and marketing director, Kevin Rose, insists, “Live with it like we have and it fits the car really well.”

Then there’s the change of personnel since EXP 9 F, a car styled by Dirk van Braeckel who soon after was replaced by Luc Donckerwolke. He himself has recently left Bentley with Stefan Sielaff taking over. For good measure, the concept was devised under the leadership of Wolfgang Dürheimer who left in September 2012, only to return to the helm of the British marque in June 2014. 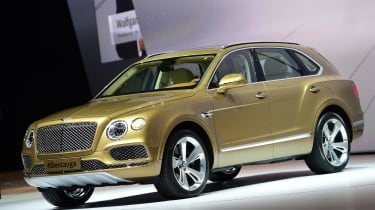 All that upheaval doesn’t seem to have harmed the Bentayga with the wraps coming off in time for its public debut at the Frankfurt Motor Show next week. And Auto Express was given a sneak preview at a pre-summer event at the company’s headquarters in Crewe, which has benefitted from £114million of investment to build Bentayga.

Bentley describes the Bentayga as “the fastest, most luxurious and most exclusive SUV in the world” and with a mighty all-new 12-cylinder W12 engine under its huge bonnet that first claim is certainly true. With 600bhp and 900NM of torque, the Bentayga will get from 0-60mph in 4.0 seconds and go on to 187mph.

Those stats make the Bentley as quick in a sprint as a Porsche Cayenne Turbo S, although the Brit has the higher top speed. Yet in spite of improvements to the weight, emissions and economy of the W12 engine, CO2 is measured at 292g/km and claimed average mpg is only 22.1mpg. That said, a sizeable fuel tank means a range of over 370 miles should be achievable. 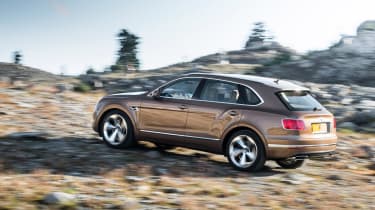 In time we’ll see diesel and hybrid Bentaygas, while a four, five and seven-seat versions will also be available.

With such a massive amount of torque on offer, Bentley says the Bentayga doesn’t need a low-range gearbox. But it does have eight driving modes available: Sport, Bentley, Comfort and Custom, plus four off-road modes. The air suspension system offers four ride heights, while there’s an electronic hill decent system, too.

Bentley Dynamic Ride uses a 48v system for quicker response to counteract the roll normally associated with such high-sided vehicles – this is a Sports Utility Vehicle, after all. 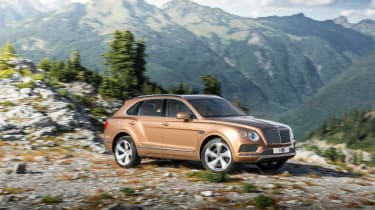 The comparisons to the Porsche Cayenne don’t stop at performance – the Bentley sits on the VW Group’s MLB platform that the next Cayenne and the new seven-seat Audi Q7 also use. Look hard enough at the Bentayga in profile and the roofline has a hint of Porsche about it, but that’s about it – the rest is pure Bentley.

The Bentayga is 5141mm long, 1742 high and 2223mm wide – bigger in every respect than either the Q7 or the Cayenne, but slightly shorter and a lot lower than a Range Rover Sport long wheelbase, which for now provides the luxury benchmark the Bentley has to beat.

And Bentley’s exterior designer Sangyup Lee showed us around the Bentayga, explaining why his company says this is the most luxurious SUV in the world.

“This is the most important launch in Bentley’s history,” he told us. “It’s a new type of luxury – we’re stretching our comfort zone here.

“It’s not your typical, rugged SUV. We’ve given it contemporary proportions – it’s a two-box design, but using elements from across the whole Bentley portfolio. We’ve very carefully applied Bentley DNA and we’ve aimed for a timeless design – we’re not trying to be trendy.”

Lee explained how the design team has pushed the engineers to deliver innovative design features such as the beautifully sculpted one-piece fender that includes a stunning light design.

Bentley employed all of the VW Group’s experience in aluminium with hot superform technology used to shape the huge fender panel with enough precision to allow a crease with a 3mm radius plus a delightful sculpting that runs alongside it. 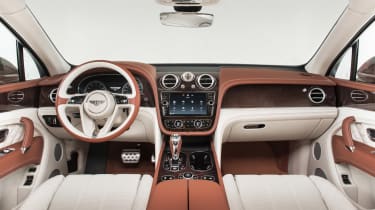 The twin headlights provide what Lee describes as ‘the perfect balance of technology and jewellery’ with knurled bevelling around the inside and a Bentley logo embedded in the LED lights. The precision with which the headlights are recessed in the fender panel is again down to the superform process, yet the lenses sit flush with the bodywork.

The outer LED daytime running lights change colour to act as indicators, while the high-pressure headlamp washers actually sit in the centre of the outer lights: “We didn’t want the usual type of washer to spoil the clean lines of the front of the car,” said Lee.

The same level of attention has gone into the interior as Bentley’s head of interior design Darren Day explains. “We’ve used a similar ‘winged’ design to the dash as in Mulsanne and GT, but with upper and lower wings,” he told us, “And we’ve worked hard to integrate the technology in a Bentley way.” 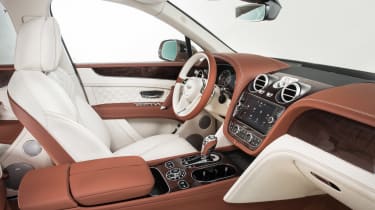 That includes an eight-inch touchscreen used to access the infotainment system, while there’s also night vision and a head-up display, plus safety features such as traffic sign recognition, adaptive cruise control and self-parking.

Rear seat passengers can get a Bentley-branded 10.2-inch Android tablet, which will make use of on-board wifi.

“Rear passengers get the same level of opulence as front seat passengers,” says Day, “With the same style of seat used in the front and back in four seat models.”

Yet in spite of the new car nearly matching the length of the long wheelbase Range Rover, it feels much smaller in the back. You’ll not have any complaints about knee or head room – even with one of the longest panoramic glass roofs we’ve seen – but it doesn’t feel as commodious as an the Range Rover sitting in the back seats.

Diamond quilting is used on the top area of the leather seats and the side bolsters “So it can be seen from the outside,” according to Day. And the leather has been subjected to six months’ worth of ‘solar loading’ to ensure it doesn’t fade in even the most extreme climates.

There’s decent practicality with an 85-litre boot (accessed via the hands-free tailgate) and folding rear seats in five-seater cars, while the design of the load bay mirrors the ‘haunches’ outside over the rear wheel arches.

Whether the Bentayga lives up to Bentley’s claim that it’ll be the most luxurious SUV in the world remains to be seen – we’ll find out when we drive it later this year and it’ll be on sale in early 2016. However, we do know it’ll be the most expensive, with prices starting at £160,200. It’ll certainly give Rolls-Royce, and its forthcoming Cullinan SUV, a benchmark to aim at.

“Bentayga is a name that reflects what we know our SUV will do better than any other car in the world – combine the best automotive luxury with outstanding performance to take the Bentley experience to new environments,” said Wolfgang Dürheimer, Bentley Chairman and CEO.

The name is designed to encapsulate the wide variety of climates and terrains that the Bentayga is capable of tackling. It comes from a combination of ‘Taiga’ – the world’s largest snow forest that crowns the entire Northern Hemisphere – and Roque Bentayga, a rugged peak in the Canary Islands. 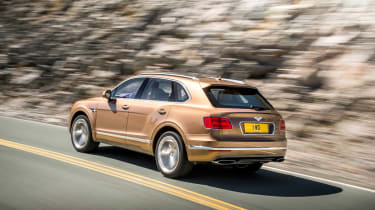 CEO Dr Wolfgang Schreiber has revealed that Bentley has had over 4,000 ‘expressions of interest’ in the Bentley Bentayga from customers – way ahead of initial predictions.

Schreiber doesn't expect to have the ultra-luxury SUV segment to himself for very long, though: “Competition is always good for the customer. We all know Rolls-Royce is thinking about an SUV, Aston Martin is also considering one and we all know about the Range Rover. There could even be some others that come along.”

And Bentley's sales and marketing director, Kevin Rose, is confident that the SUV will be a showroom success: “Thirty per cent of our existing customers already have a high-end SUV, so if we can convince even a small amount of those into buying the car we have a very strong business case indeed.”

The plan is to sell 3,000 to 4,000 SUVs a year, which would make the new model a crucial part of Bentley’s aim to boost annual sales from 8,510 last year to 15,000 cars by 2018. The biggest markets are expected to be the US and China – accounting for around 50 per cent of sales – with Russia and the Middle East close behind.

Schreiber also said there’ll be a small overlap with the Range Rover on price, with the SUV will starting at £160,200, but prices are likely to rise to £200,000 for the range-topping models.

Bentley Bentayga could be the first of many Bentley SUVs 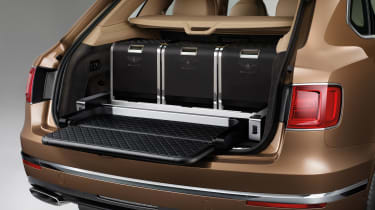 Bentley Chairman and CEO, Wolfgang Durheimer, has also expressed interest in a expanding the number of Bentley SUVs, to compete with the likes of Land Rover, albeit at a higher price point. The revelation came during a press conference where Durheimer announced record global sales of 11,020 cars in 2014 – a nine per cent increase on 2013.

“There are good examples in the market, so a derivative is an interesting idea,” Durheimer said. Kevin Rose, head of sales and marketing, added: “We are keeping a close eye on what Land Rover has done with the Range Rover, Range Rover Sport and even the Evoque.”

The rapid growth of the SUV segment, which Durheimer revealed is expanding at three times the rate of the new car market as a whole, clearly hasn’t escaped his attention and could be the catalyst for both a smaller SUV and sportier derivatives of the car we’ll see later this year. A 'baby Bentayga' seems very likely at some point in the future.

What do you think of the Bentley Bentayga? Give us your thoughts in the comments section below... 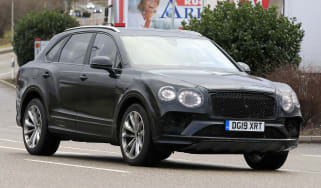 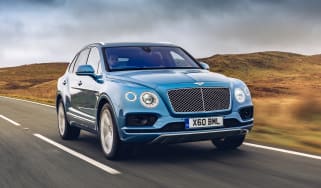 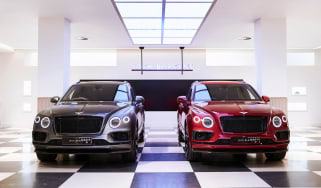 Bentley has teamed up with the renowned Savile Row tailor, Huntsman, to produce a unique Bentayga with a tweed-trimmed interior