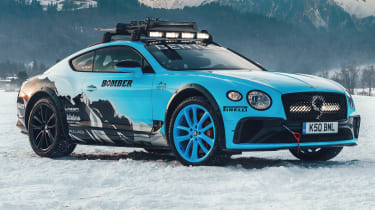 Bentley has built a unique Continental GT W12, which will compete in the upcoming GP Ice Race in Zell am See, Austria, between the 1st and 2nd February 2020. It will be driven by Junior World Rally Championship driver, Catie Munnings, who will be the first modern-day female driver to competitively race for Bentley Motorsport.

The specially prepared Continental GT W12 shares most of its running gear and chassis components with the production car, bearing only minimal changes to meet the racing event’s safety standards. As such, Bentley has fitted a roll cage, racing harnesses, racing seats and an onboard fire extinguisher system.

Bentley increased the Continental GT’s track-width by 15mm and lifted the car’s suspension slightly to improve its ground clearance. The standard GT’s three-chamber air springs and active roll stabilisation system have both remained untouched, while the car’s standard alloy wheels have been wrapped in studded Pirelli Scorpion tyres.

Cosmetic enhancements include a roof-rack, a handful of high-output LED spot lamps and a set of flared wheel arches, which accommodate for the car’s wider stance. It’s also wrapped in a livery which bears which pays homage to the Continental GT W12 which set the Pikes Peak Hill Climb production car record at the end of last year.

With the exception of a custom, quad-tipped Akrapovic exhaust, the Continental GT ice racer’s twin-turbocharged 6.0-litre W12 engine is identical to the unit found in the production model. It develops 626bhp and 900Nm of torque, which is fed to all four wheels via an eight-speed dual-clutch gearbox.

Bentley is keen to stress that its ice racing modifications haven’t affected the Continental GT’s performance – the ice racer’s top speed remains the same at 207mph, while 0–62mph is dealt with in an identical 3.7 seconds.

What do you make of Bentley’s Continental GT Ice Racer? Let us know in the comments section below…