We name the UK's favourite car - and rank the top 100 from best to worst. 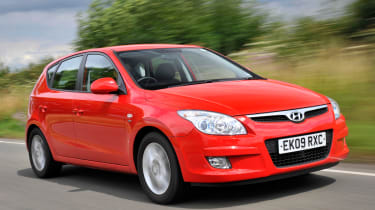 Hats off to Hyundai! It has done what no Korean marque has ever achieved before: walked away with the most prestigious Driver Power prize of the lot. You have voted the i30 family hatch the best car to own in the UK – and this will cause a shockwave of respect, jealousy and envy from the world's automobile manufacturers.

It's hard to overstate the magnitude of this result. Following in the tracks of Skoda's Octavia, which first finished in the number one spot back in 2007, the i30 has proved more satisfying to own than models which claim to offer better quality, greater driving involvement and stronger desirability.

According to the people who drive this Hyundai every single day, there is no compromise in choosing it over more expensive competitors. In fact owners can expect greater satisfaction and reliability.

So what's the key to the i30's shock success? As with every Driver Power champion, the only route to the head of the chart is to excel in every area. Last year, the i30's sister model, the Kia Cee'd, made its Top 100 debut in a credible sixth place. This time, the Hyundai has shot straight to the top in its first appearance in our survey.

As more drivers get behind the wheel, and appreciate the Hyundai's strengths, the verdict is unanimous: this car is the cream of the crop.

“It does exactly what it says on the tin and more. Excellent vehicle and a 5 year warranty” - Mr David Stewart, Borth, Dyfed.

“The build quality, ride comfort and spec level on my Hyundai are head and shoulders above anything I have owned before - what a surprise for the money - spread the word - Hyundai is the way forward!” - Mr Norman Towson, Airdrie, Lanarkshire.

What’s the Driver Power top 100? It’s the definitive car ranking – by drivers for drivers. Cars are rated by their owners, and each is then scored on how satisfying it has been to own.

How are results calculated? Our survey asks drivers to rate their car out of five in 10 key categories. An independent data processing company then crunches the numbers to provide the overall average scores.

Why doesn’t my car feature? Not all models can be included, due to the sheer number of cars on UK roads. Plus, to ensure our results are reliable, we need a robust sample size of drivers of each vehicle.