American car designer and racing driver Carroll Shelby was at the heart of the AC Cobra, despite the British badge on the bonnet. 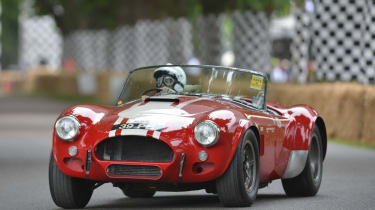 American car designer and racing driver Carroll Shelby was at the heart of the AC Cobra, despite the British badge on the bonnet. Shelby saw the opportunity for the beautiful AC Ace, which had previously been using a straight-six engine, to be fitted with a powerful V8 engine. Ford, seeing the opportunity for a Corvette rival, offered Shelby a 4.2-litre V8, which was fitted to the Ace - and the Cobra was born.

The lightweight body and thumping V8 combined to create an incredibly fast car - even now, the Cobra has a fearsome reputation for having a huge turn of speed without any driving aids to reign it all in. The car was even fitted later on with a 7.0-litre V8 engine, plus a restyled body with huge flared wheel arches. With 425bhp and only weighing about a tonne, it was a seriously fast car - in fact, one was recorded at 186mph on the M1 motorway in 1964 (before the 70mph speed limit was put into force). 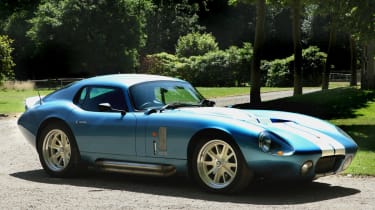 The AC Cobra was developed into a Daytona Coupe version for the 24 Hours of Le Mans race in 1964 - the fixed roof was needed to increase the car's top speed on the long Mulsanne Straight. It was all part of an effort to beat Ferrari on the track - and in the end the 190mph Coupe took victory in the GT class at the race.

Today, the AC Cobra is a rare and desirable classic car - but with many kit cars and replicas on the road, it can still be possible to experience the incredible power-to-weight ratio of this American-British crossover.