The updated BMW 1 Series has appeared at the Geneva show, with styling updates and a revamped engine range 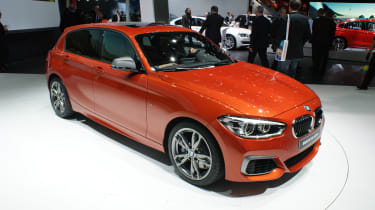 BMW has brought its facelifted 1 Series hatchback along to the Geneva Motor Show with its new range of three- and four-cylinder petrol and diesel engines. The facelifted model will go on sale in the UK in late March.

The most notable changes occur at the front end, where the old model’s droopy headlights are replaced with narrower, more angular units that come as standard with LED running lights, and can be ordered as full LED lights as an option. M Sport models get full LED headlights as standard. 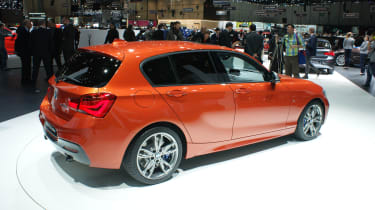 The rear has received a major overhaul, too, with much slimmer, L-shaped LED taillights that wrap around and along the boot lid. A new design for the double kidney grille and larger intakes (especially on the aggressively-styled M Sport model - see the white car in our gallery) create a meaner look.

Inside, there’s a new cloth fabric for the seats and a piano black finish has been applied to the centre console, along with a chrome surrounds on the various buttons. Opt for the Professional sat-nav system and you get a 8.8-inch screen (6.5-inch screen is standard), while climate control is standard. The self-parking function has been updated to include bay parking, as well as parallel parking, while radar-based active cruise control, with stop and go function, is also now offered. 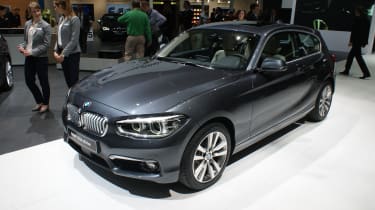 The engine range is taken largely from BMW’s new modular engine family, so has plenty in common with the new MINI. The most efficient model is the 116d EfficientDynamics Plus model, powered by the same 114bhp 1.5-litre three cylinder diesel as the 116d, but with a range of aero and efficiency tweaks. It returns 83.1mpg and 89g/km (116d returns 78.5mpg and 94g/km, with 0-62mph in 10.3 seconds). 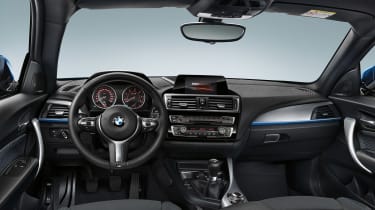 Welcome to our Geneva Motor Show hub page, scroll down for all our Geneva content...
BMW 1 Series review