It was only a matter of time before BMW’s M division got its hands on the 2 Series, and this is the result – the hotly anticipated M2 Coupe. The car has made its public debut at the 2016 Detroit Motor Show and is due on sale in April priced from £44,070. Fewer than 500 models are earmarked for the UK.

Two years after the car on which it’s based was launched, the M2 has the Audi RS3 firmly in its sights. With the M division’s reputation for producing brilliantly balanced, agile and searingly fast rear-wheel-drive performance cars, this new M2 Coupe is set to be a worthy competitor. 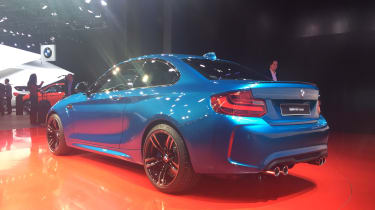 It looks like a baby M4. It has similar air intakes at the front, flared wheelarches and trademark quad exhausts. The rear end is more toned and sculpted than the 2 Series’ and there’s a clear influence from the limited-run 1M Coupe.

According to BMW, the M2 has been designed for aerodynamic purposes – not for style. As a consequence, BMW has managed to reduce lift by 35 per cent and drag by five per cent over a standard 2 Series. Wider sideskirts are another modification, to accommodate the car’s wider tracks and larger wheels. 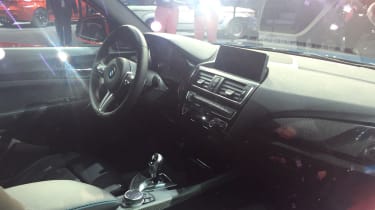 The M2 will use BMW’s 3.0-litre straight-six turbocharged engine, which features in the M235i, but has been uprated for the new model. It produces 364bhp and 465Nm of torque, plus an additional 35Nm is available with the overboost function between 1,450 and 4,750rpm.

The gearbox, brakes, front and rear axles, crankshaft and pistons have all been lifted from the M4 Coupe, too, while there’s also extra water cooler for the engine to keep temperatures stable. The M2 also features an electronically controlled limited-slip differential – to help make best use of the engine’s performance – as standard.

Engineers have used aluminium to reduce weight where possible with the M2, making it 35kg lighter than the M235i, at just 1,495kg. It will be limited to 155mph and 0-62mph takes 4.5 seconds when paired with the six-speed manual – an optional seven-speed DCT automatic reduces that to 4.3 seconds. 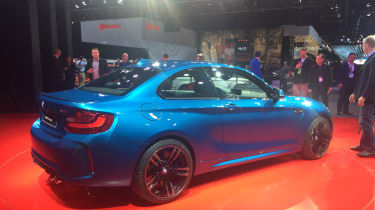 “We’ve got a unique selling point, and it’s something we’ve pushed very hard for, to offer a manual and a DCT,” Steve Roberts, BMW UK’s product operations manager for small cars, told us.

“We know, with our current M drivers, there’s a lot who love driving with the DCT gearbox, but we know there are a lot of people who will want this as a driver’s car and will want it with a manual.”

BMW’s TwinScroll turbocharger has been used on the M2 to improve efficiency, but as the turbocharger has been integrated into the exhaust, this means it also performs better from a cold start. BMW claims the M2 will achieve 35.8mpg and emit 185g/km of CO2 when coupled with the DCT auto, while the manual is slightly less efficient, at 33.2mpg and 199g/km. 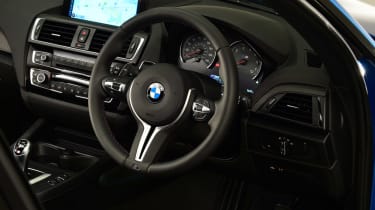 Although the outside clearly shows the M2 is a member of the M family, there are few surprises on the inside. The M logos stitched into the seatbacks suggest the car’s potent performance. Elsewhere, standard kit includes M Dakota leather, M division bodykit and brakes, BMW’s Professional Navigation, Bluetooth connectivity and 19-inch alloy wheels. 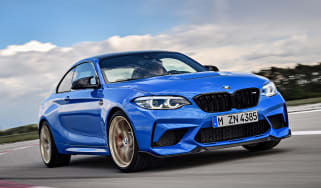 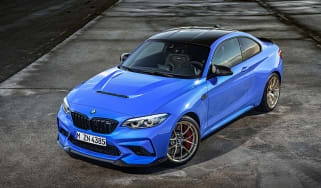