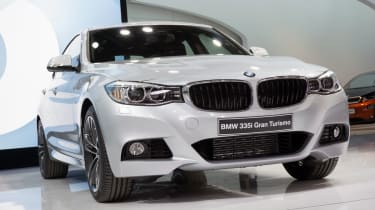 The BMW 3 Series Gran Turismo has had its official unveiling at the Geneva Motor Show, and we've got full details of the latest addition to the range. The 3 GT becomes the third member of the BMW 3 Series range, following the latest BMW 3 Series saloon and Touring estate models.

According to BMW, the 3 Series Gran Turismo aims to offer the “dynamic, sporting” qualities of the saloon, with the “practicality and versatility” of the Touring.

All BMW 3 Series GTs come with an electronically opening tailgate, a two-piece parcel shelf that can be stored under the boot floor, and 40/20/40 split folding rear seats.

The 3 GT has a 520-litre boot – bigger than the 3 Series Touring by 25 litres – that can be expanded to 1,600 litres in its largest load-carrying configuration, although the car doesn’t have any space to carry a spare wheel.

Lashing points, a 12-volt power socket and a storage tray under the boot floor are standard, while buyers can opt for a hands-free opening boot, which means the tailgate can be opened by waving your foot under the rear bumper.

The bumpers and head and tail-lights are unique to the car, which also features a smoother bonnet than that fitted to the 3 Series saloon, as well as frameless doors. The 3 GT also gets Air Curtains, which smooth air flow over the front wheels. These combine with the new Air Breathers behind the front wheel, which help extract air from the front wheelarches, further reducing drag.

The 3 GT is also the first BMW to get an active rear wing, which pops up from the bootlid when you hit 68mph, increasing downforce by 35 per cent. It drops automatically when you slow below 43mph, and can also be raised or lowered using a button in the driver’s door.

Inside, BMW claims that the standard 3 Series interior has been upgraded for the Gran Turismo, including large cupholders between the front seats and in the doors. The extra exterior size has allowed BMW to raise the height of the seating position by 59mm, for a commanding driving position, and added 70mm of rear legroom over the saloon.

All models come with at least 17-inch alloys as standard, and while the suspension is carried over from the 3 Series saloon range, BMW has softened the settings for greater long-distance comfort. An M Sport kit will be available, featuring 19-inch alloys and 10mm lower suspension.

That means the new 3 Series Gran Turismo costs just over £2,900 more than the equivalent 3 Series saloon models. The 325d model arrives in the UK later in the year. All versions are rear-wheel drive, hoowever a 320i xDrive four-wheel-drive model will also be sold.