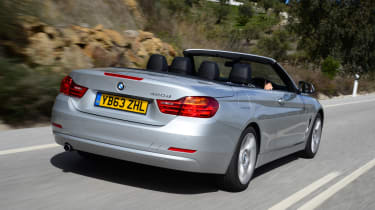 Anyone looking in to buying a BMW 4 Series Convertible has to be prepared for a couple of things: firstly, this car doesn’t have the handling finesse of the Coupe. Generally speaking, it’s very good but by BMW’s recent high standards it’s not quite up to scratch. But what you give up in handling you gain in comfort, and the 4 Series Convertible works well as a seriously relaxed summer cruiser. With that folding hard-top in place, it feels just as refined as the Coupe, too.

When we drove the BMW 4 Series Convertible earlier this year, we didn’t think the hugely powerful 435i engine was the right fit for the 4 Series Cabrio's relaxed dynamics. So a 420d model should be a better fit.

Rather than the 3.0-litre six-cylinder turbo in the 435i, the 420d gets a 2.0-litre turbodiesel engine but it still has a pretty healthy 181bhp. The performance is good enough, with 0-62mph taking 8.2 seconds but it’s clearly lacking the urgency of the 4 Series Coupe, which manages the same sprint in 7.5 seconds.

That’s down to the Convertible’s kerbweight, which is around 200kg heavier than the Coupe’s, and most of that can be traced to the complicated roof mechanism. It’s a three-piece folding hardtop that takes 20 seconds to lower in to the boot. Once there, you can press buttons on the bootlid to electrically lift or lower the folded roof slightly so you can easily load or unload bags from the boot.

You’ll find the amount of space in the boot shrinks quite considerably when you’ve stowed the roof. It’s 370 litres with it up and 220 litres with it down, which doesn’t sound too bad but it’s really only big enough for a few bags of shopping.

There are benefits to the folding roof, though, since it provides excellent refinement when it’s raised. Convertibles normally have a slight whistle here or there that the hardtop doesn’t have but in the case of the 4 Series, it’s nearly identical to the Coupe. Even with the roof down it does a pretty good job of keeping things calm in the cabin, and with the optional wind deflector in place there’s no reason not to take on a top-down motorway journey.

That all adds to the 4 Series Convertible’s billing as an extremely good cruiser, with a nicely cushioned ride over broken surfaces. It’s also loaded up with kit, even on entry-level SE models, which comes with parking sensors, heated seats, cruise control, climate control and a 6.5-inch colour display.

But the 4 Series Convertible never feels as at home in the bends as the Coupe does. Its steering is missing that final sharpness and the body rolls just a fraction too much. If that sounds overly critical, it’s just because we’ve come to expect so much from the 3 and 4 Series models and this Convertible just doesn’t have the handling edge that other BMW models do.

Think of it more as a relaxed and comfortable boulevard cruiser than a sports car and you’ll be seduced by the 4 Series Convertible. You’ll have to be willing to pay a premium over the Coupe, though, for the extra comfort and style to the tune of £36,675 – that’s £4,880 more than the a 420d SE Coupe.