BMW lifts the lid on its mighty new M4 Convertible in New York. It goes on sale in September for priced from £60,000 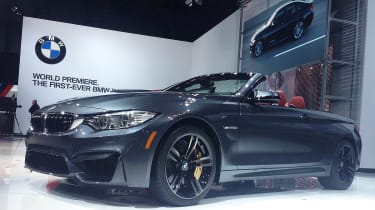 BMW has lifted the lid on the new M4 Convertible. Now in its fifth-generation, the high-performance open-top model from BMW’s M division replaces the outgoing M3 Convertible and made its debut at the 2014 New York Motor Show.

Based on the M4 Coupe, the Convertible features the same three-piece folding metal roof as the 4 Series convertible, which can be stowed away at the flick of a switch in 20 seconds. It’s better insulated than the previous M3 Convertible, helping lower noise levels in the cabin. BMW claims the new M4 Convertible is up to 2dB quieter inside than the old M3 version. 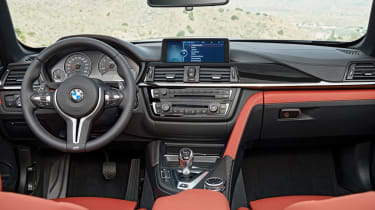 An innovative new loading-aid fitted in the boot also allows easier access to items when the roof has been stowed away. Luggage capacity has increased over the outgoing Convertible to 370 litres when the roof is closed and 220 litres when it is stowed.

When sales kick off in September the M4 Convertible will be offered with the option of a six-speed manual or seven-speed M double clutch transmission twinned with the 3.0-litre twin-turbo six-cylinder engine.

The cabriolet is primarily slowed up by the added 250kg it carries, increasing the total kerbweight to 1,750kg. The heavy roof mechanism and small amounts of strengthening on the flanks of the car add weight but it’s still 60kg lighter than the previous M3 Convertible. 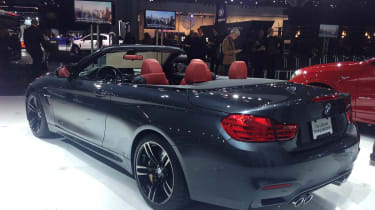 Under the skin, the drop top shares all its running gear with the Coupe. An electronically controlled limited slip differential is fitted as standard, so too is adaptive M suspension and EfficientDynamics fuel saving technologies, such as stop/start and brake energy regeneration.

The added weight does impact economy slightly, with the Convertible returning 31mpg in manual and 32.5mpg in automatic form – down on the 34mpg of the coupe. 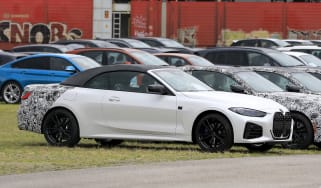