In the battle for luxury coupe honours, the BMW 4 Series and Audi A5 lead the way, but which has the edge? 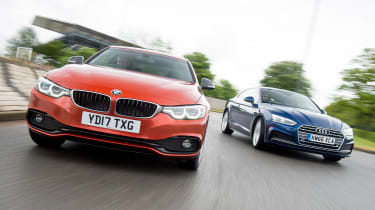 Diesel coupes offer an appealing mix of style, sporty driving and efficiency that won’t whack you in the wallet when it comes to running costs. And the latest mid-size two-door to join the fray is the facelifted BMW 4 Series.

Facelifted is the operative word, because the changes to the 4 Series are minimal and centre around tweaked headlights and tail-lamps and new front and rear bumpers.

In the battle of the 2.0-litre diesel coupes it was the Audi A5 that came out on top when it met Mercedes’ C-Class Coupe at the end of last year, so it’s this car the 4 Series has to beat. The winner will marry sharp design and handling with decent straight-line performance, but this shouldn’t be at the expense of efficiency or usability. 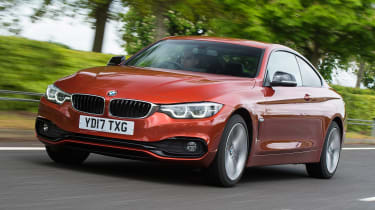 The BMW 4 Series is a sportier proposition than its 3 Series saloon sibling, so in an effort to increase fun from behind the wheel and response to the driver’s inputs, BMW has altered this facelifted 4 Series’ chassis settings.

Cars on both the passive dampers and adaptive dampers now feature a stiffer set-up that, BMW says, doesn’t compromise ride quality. Our car was fitted with the £515 adaptive dampers, and in the standard Comfort mode the BMW coped well with torn roads and even vicious bumps in the surface. The chassis feels compliant and more absorbent than the Audi’s, which was fitted with standard suspension, and ramping the system up into the Sport setting further improved body control at the expense of a little compliance. 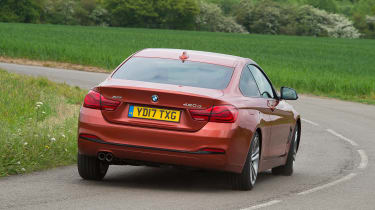 Here the 4 Series feels tauter and planted in faster turns on smooth roads, although the firmer damping means it can be knocked off line a little more by a mid-corner bump. While it’s more direct in this setting, the steering weight is ramped up to the point where it feels artificially heavy. It’s much nicer in Comfort and feels better matched to the suspension on the road, plus there’s more comfort on offer for no real penalty in cornering ability. You’ll only notice a little more roll on the move.

No matter what mode you’re in, the 420d’s 187bhp 2.0-litre turbodiesel engine is keen to pick up. At the track the BMW sprinted from 0-60mph in 7.2 seconds, helped by strong traction off the line from the car’s xDrive four-wheel-drive system. This was two-tenths faster than the front-drive Audi – although we’re confident that the A5 quattro would be closer to the BMW.

The 420d was also quicker in-gear thanks to an extra ratio in its eight-speed automatic box. It shifts quickly and smoothly, but it’s not quite as sharp or responsive to a pull of the paddle as Audi’s dual-clutch unit. This showed between 30 and 70mph through the gears, where the A5 was four-tenths faster. 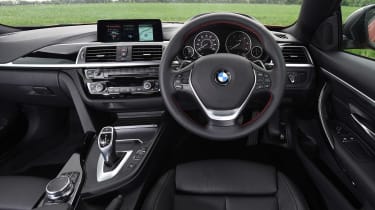 Inside, like the styling and chassis developments, BMW has taken an evolutionary approach with some very subtle updates. The firm’s latest iDrive infotainment system features, while there’s the option of a new digital Multifunction Instrument Display to match the A5’s Virtual Cockpit. It’s not quite as convincing, though.

Quality is good, with soft-touch plastics lining the dash featuring some imitation double stitching to make it look like leather. All of the interior controls feel solid, while the driving position is more natural than the A5’s. However, the cabin just doesn’t feel quite as classy or as hi-tech as the Audi’s. 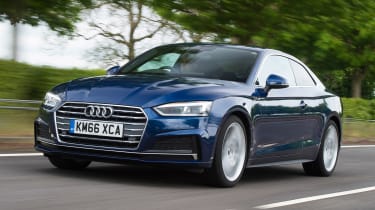 The latest Audi A5 Coupe doesn’t look much different to its predecessor, but under the classy and understated exterior, it’s all new. It’s based on the brand’s MLB scalable platform, and it’s lighter, faster and more efficient than both the model it replaces and the revised 4 Series.

Even so, it wasn’t able to make this advantage pay at the track, where it had to give best to the BMW. Without the benefit of four-wheel drive, the A5 scrabbled from 0-60mph in 7.4 seconds, which was two-tenths slower than the 420d. The Audi also trailed during the in-gear tests, where its twin-clutch transmission was hobbled by its combination of fewer and more widely spread ratios. For instance, the box wouldn’t even let us complete the 50-70mph test in seventh. The A5 managed 9.9 seconds in sixth while the BMW took 7.5 in seventh and 5.8 in sixth. 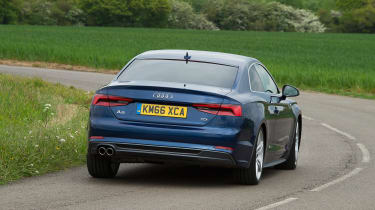 Still, the Audi’s 187bhp 2.0-litre TDI diesel is smoother and more refined than its rival’s unit. And while the seven-speed twin-clutch gearbox’s ratios are poorly chosen for UK roads, with an extremely tall top gear, it shifts seamlessly in auto mode and responds promptly to the wheel-mounted paddles. That said, for many buyers, the slick and precise six-speed manual will be a better choice as it’s good to use and makes for more relaxed progress once under way.

Turn into a corner and the A5 responds more quickly than the BMW, plus there’s a little less body roll. Yet the steering isn’t as well weighted, while mild torque steer upsets the car’s composure when powering out of slower bends – the four-wheel-drive quattro model is more planted in similar situations.

Take things easier, and the A5 impresses as a relaxed and refined cruiser. On the standard suspension set-up it’s a little firm at low speed, particularly on our car’s £900 19-inch alloys, but go faster and the dampers do a good job of filtering out road imperfections. Wind noise is also well, suppressed, while the tall-striding seventh gear keeps mechanical intrusion to a minimum, until the gearbox inevitably kicks down. 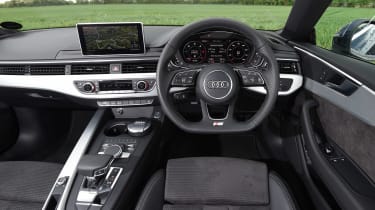 However, even this quirk can’t detract from the Audi’s premium appeal from behind the wheel. It’s not as good to drive as the 4 Series, but the smartly designed and beautifully finished cabin oozes the sort of classy sophistication you expect from a car like this. The ambience is further enhanced by the £1,395 optional Technology Pack, which adds a larger 8.2-inch infotainment screen and the brand’s trademark Virtual Cockpit, replacing the traditional analogue dials with a configurable 12.3-inch TFT display. 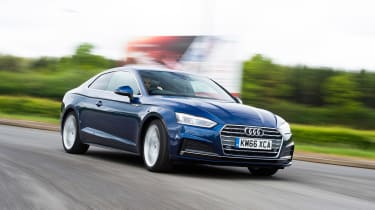 With good looks, a classy cabin, cutting-edge kit and strong refinement, the A5 ticks all the upmarket coupe boxes. It’s not quite as engaging to drive as the BMW and rear seat passengers aren’t as well served, but in a class where image counts, the desirable Audi does just enough for the win. 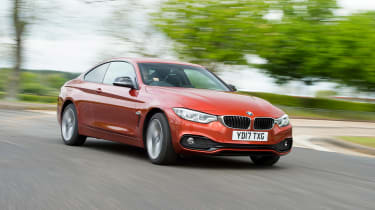 It’s more involving to drive, but the 4 Series lacks the hi-tech edge of the Audi inside, despite the equipment improvements. It’s just as practical and although it’s marginally cheaper, it’ll cost more to run. If driving fun is a priority, but you don’t want to sacrifice usability, the 420d is the car to go for.